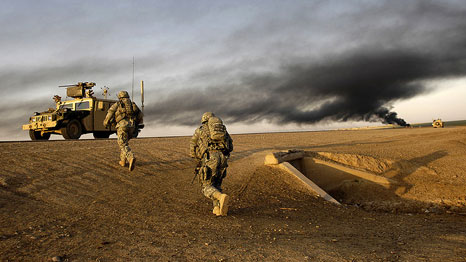 Tackling climate change will help combat terrorism and poverty, said US Secretary of State John Kerry, as the US debates its response to ISIS militants in Iraq.

Speaking at a two-day summit on ocean protection, Kerry said that creating a low-carbon energy market will create enough wealth to cure “any number of problems”.

“The world is waiting for people to be put to work. We have extreme poverty; we have terrorism that comes out of it,” he said.

“We have any number of problems that could be cured by energy policy that makes sense, and at the same time we would solve this problem [of climate change].”

The potential of the US$ 6trillion global energy market was greater than the boom of the technology industry, he said, which he added raised the income of every class of American during the 1990s.

“It’s the mother of all markets,” he said.

Kerry hosted the two-day summit at the US State Department, which focused on sustainable fishing, marine pollution and ocean acidification.

Ocean acidification is caused by climate change, as some the CO2 pumped into the atmosphere is absorbed by the sea. This damages marine life, and the humans which depend on them for their livelihood.

The summit coincided with an increasingly urgent crisis in Iraq, as militant group ISIS seized cities across the north of the country, near the border with Syria.

Questioned on whether he had considered cancelling the summit in light of the situation, Kerry said that ocean acidification itself posted a “vital national security” threat to the US.

“We can’t stop one thing when something else happens here. The State Department deals with a world that is complicated today, and we need to do all of these things simultaneously,” he said, in an interview with Yahoo News.

The two days raised $800 million in commitments from government and private sources towards ocean protection, as well as a $1 billion climate mitigation and adaptation pledge from Norway.

Obama announced a new initiative to create the world’s largest marine sanctuary, protecting an area of around 800,000 sq miles in the Pacific from commercial exploitation.

Leonardo Di Caprio pledged US$ 7million from his foundation to ocean conservation projects, and spoke on the need for greater political and media attention in the face of “scary” climate change impacts.

“We cannot afford to be bystanders in this pre-apocalyptic scenario. We have to become the protagonists in the story of our own planet’s salvation. We need to step up now,” he said.