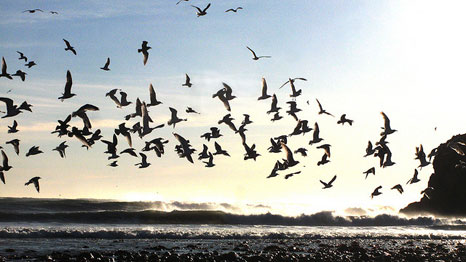 US Secretary of State John Kerry will hold a two-day summit on the problems facing the world’s oceans, including acidification.

Ocean acidification is caused by the carbon dioxide emissions which are also causing global warming. This can damage the animals that live in the sea, which has a knock on effect on the humans who depend on fishing for their livelihoods.

Around 400 people from 80 countries will gather at the US State Department on 16 and 17 June for the Our Oceans conference, including Price Albert II of Monaco, Kiribati president Anote Tong and World Bank president Jim Yong Kim.

“Governments, individuals and communities can act now to reverse these trends. We can protect the ocean if we all start treating it like our ocean,” said Kerry.

Climate policy often focuses on the warming effect of CO2 on the atmosphere and oceans. Internationally, governments have set a goal of keeping global warming below 2C. Beyond this, scientists have warned that the impacts of climate change become more severe.

Oceans have become 30% more acidic since humans started burning large amounts of fossil fuels for energy, but even so the problem has received relatively little attention by comparison.

“We know the more CO2 we put in the atmosphere, the more will be taken by the oceans and the more acidic it will become,” said Carol Turley, a scientist from the UK-based Plymouth Marine Laboratory, who is speaking at the summit.

“I call it the other CO2 problem. It’s another really good argument to reduce CO2 emissions,” she said, adding that she would like to see it included in the UN’s climate change deal, set to be signed off in Paris in 2015.

The conference will be an opportunity for participants to boost action to tackle ocean acidification, according to the State Department, including better research and the protection of coastal habitats that absorb CO2, including seagrass beds, salt marshes and mangroves.

The conference will also discuss other environmental issues facing the oceans, including sustainable fisheries and marine pollution.

The State Department has also organised a concurrent ‘Fishackathon’, inviting coders and designers to collaborate on technology to make fishing more sustainable.

These two days are part of a wider push by the US to draw greater international attention to the challenges facing the oceans.

Kerry said: “I’m convinced the ocean conference will be an important catalyst, that governments and experts can lead the way. But I know it will take more to win this crucial struggle.”