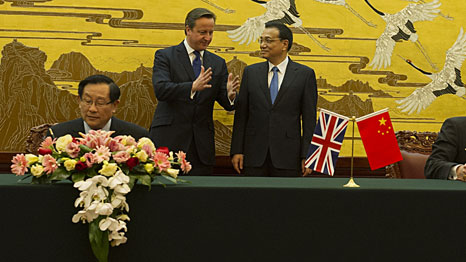 China and the UK will “redouble” efforts to secure a new UN climate deal in 2015, the two countries said today.

The joint statement was released as Chinese Premier Li Keqiang makes his first official visit to the UK since taking office last year.

The declaration highlighted that tackling climate change would also help reduce air pollution – a problem for both nations’ capital cities, but particularly Beijing.

“Both sides recognise that climate change and air pollution share many of the same root causes, as well as many of the same solutions. This constitutes an urgent call to action,” says the statement, issued by the UK’s Department of Energy and Climate Change.

“We must redouble our efforts to build the global consensus necessary” for a deal in UN Paris set to be signed in Paris next year, the statement says, adding they will intensify policy discussions and boost concrete action to this end.

China, the world’s top emitter of greenhouse gases, will be central to the success of the deal, which will become the world’s first global climate agreement to bind both developed and developing countries.

“Both governments recognise that tackling climate change is fundamental to our future and have committed to reduce emissions while enhancing energy security by investing in nuclear power,” said UK Secretary for energy and climate change, Ed Davey.

“The joint statement with China reflects our shared intent to re-double efforts for an ambitious global agreement and domestic solutions to climate change.”

Premier Li’s visit, a three-day trip that is part of a wider European tour, will focus on trade deals between the UK and China. The two countries are supposed to sign around £18 billion in commercial agreements.

Despite strong words on climate change, it is predicted that much of this will come from deals on oil.

BP is expected to announce a long-term deal to supply over £5 billion of liquefied natural gas (LNG) to China, while Shell will sign a framework agreement to work with the state-owned China National Offshore Oil Corporation on LNG projects across the world.

But the joint statement shows that climate change, and in particular the UN’s climate negotiations, remains a topic of mutual concern.

The new deal will support the low carbon transition in both countries, it says. The UK has committed to reducing its emissions 50% on 1990 levels by 2027, while China says it will reduce its emissions by 40-45% per unit of GDP by 2020 compared with 2005 levels.

Air pollution in China has prompted tougher action on climate change at home, since it is largely caused by the coal plants and vehicles which are also mainly responsible for global warming.

A two-week UN gathering in Bonn, Germany, which wrapped up on the weekend helped push this deal one stage closer to completion.

The co-chairs running the negotiations have agreed to provide a text summarising countries’ positions – many still divided over key issues – by 15 July, which observers say will add clarity to the process.

China and the UK, as part of the EU negotiating bloc, remain at odds over key issues, such as how the new deal should distinguish between rich and poor countries.

The two countries have also committed to work together to support the UN Secretary-General Ban Ki-moon at a climate conference that he will host in New York this September, at which he has invited world leaders to announce “bold actions”.

Neither UK prime minister David Cameron nor Chinese president Xi Jinping have yet confirmed whether they will attend the summit.

Alastair Harper, Green Alliance’s Head of Politics, commented: “It’s significant that the Prime Minister is working with the Chinese Premier to achieve a global climate deal. It would seem that David Cameron has firmly rejected Tony Abbot’s recent invitation to join the naughty table on slowing climate action.

“Given that a deal is now clearly both the United States’ and China’s top diplomatic priority, we have chosen the right company for our economy and place in the world. To build on this, the Prime Minister should formally accept Ban Ki-Moon’s invitation to September’s world leaders summit in order to leave his mark on the talks to come.”