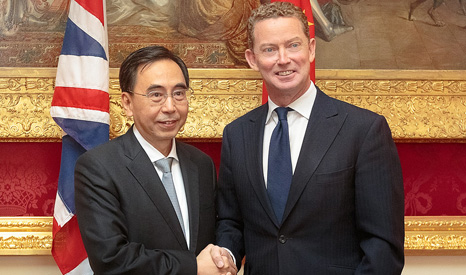 UK climate and energy minister Greg Barker has laughed off suggestions the country could enter into an alliance against climate regulation with Australia and Canada.

According to reports from Australia, Prime Minister Tony Abbott wants to build a coalition of countries opposed to carbon pricing and a proposed global emissions reduction deal in 2015.

Speaking in London, Conservative minister Barker said there was no chance the government would join efforts to block international efforts to address climate change.

“I think you can take it the UK won’t be joining an alliance against regulation. We are engaged with Australia and New Zealand, encouraging them to take a responsible proactive part in seeking an ambitious global treaty on climate change,” he said.

“It was something the Prime Minister has raised on occasion with the Prime Minister of Australia. I think we do have a slight difference of view here, but we have very strong ties here and whatever discussion there is will be framed positively.”

India has also been mentioned as a possible partner blocking a global treaty, although this would make the country deeply unpopular with members of the G77 group of nations.

Canada ditched the Kyoto Protocol in 2012, claiming it couldn’t meet the targets set by the world’s only legally binding climate treaty.

Both leaders have attacked efforts to price carbon, and have welcomed investments from companies in their burgeoning coal, oil and mineral extraction industries.

Abbott has also blocked moves to include climate change on the agenda of this year’s G20, which Australia will host, saying he wants to focus on economic growth.

Speaking earlier this week in Canada after meeting Harper he called for action that would not “clobber the economy”.

Abbott meets US President Barack Obama on Thursday in what will be their first official meeting.

In an interview aired this week Obama repeated his belief that climate change could be the most significant long-term challenge the planet faces.