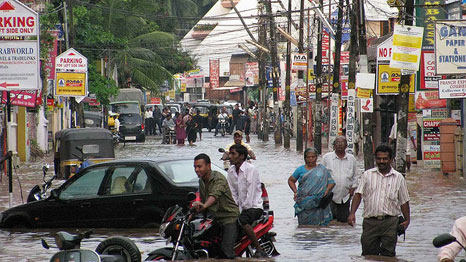 Countries have ploughed on with the task of creating a new UN climate treaty over the past two weeks in Bonn, but a lack of money is still hampering progress, say the world’s poorest countries.

During two weeks of negotiations, there has been no “major advancement” in figuring out how developed countries will raise the US$ 100billion which they have promised to donate every year from 2020, according to Quamrul Chowdhury, the lead negotiator for the Least Developed Countries.

“The lack of finance and support are the serious issues and need urgent resolution in building trust in the whole climate negotiation process,” he said.

“The negotiations in Bonn are progressing at a very slow pace,” added Chowdhury, adding that the poor countries he represents believe that the talks “still falter in reaching key milestones to strike a robust, ambitious and fair Paris Protocol.”

All countries have said they will sign an agreement in Paris 2015 designed to stop climate change passing the 2C threshold, which scientists say would have severe impacts on humans and the environment.

Poorer countries say for this deal to work, they need these funds to invest in new clean energy systems, and prepare for future extreme weather events linked to global warming.

A UN-backed Climate Fund is in the pipeline, and now ready to receive funds. Supporters hope it will start distributing money at the start of 2015, but so far its pleas for a cash injection of $10-15 billion remain unanswered.

Climate negotiators have been gathered in Bonn since 4 June to hammer out what this deal might look like, but there are many issues needing to be resolved.

Countries still need to decide the overall shape of the text. Legally, the draft text must be completed by May 2015, so that countries have time to examine it before the Paris meeting that December.

Last year at a UN meeting in Warsaw, countries agreed that the “elements” of this text should be on the table by Lima. But there is still considerable disagreement on what this actually means, says Alden Meyer from the Union of Concerned Scientists.

“I think other countries would like to see the legal drafting process start before then. Meyer added that Venezuela has already proposed the formation of a legal team to start drafting the text – a move which most countries viewed as “premature”.

In a wrapping up session on Thursday, countries discussed how the text should be composed, with some supporting a document drawn up by the co-chairs, and others supporting a synthesis of contributions from the different negotiating blocs.

Some fear that the latter option could lead to an enormous text that will be difficult to condense at final negotiations.

Countries must also decide exactly what they will contribute to this deal in ‘intended nationally determined contributions’ (INDC), which must be submitted by March 2015.

Some say they only want to make pledges on how to reduce emissions, while others are pushing for a more comprehensive package that includes finance, adaptation and technology.

Ronny Jumeau, who represents the small island states, said that too many negotiators are still complaining they don’t understand the “mythical creature” of INDCs, and not enough working to come up with a definition. “After all, how can we start preparing our NDCs if we don’t know what it is?” he said.

What countries have to submit will be one of the most high profile issues in forthcoming discussions of the new treaty, said Sven Harmeling of CARE International, as it will determine the breadth of action that countries will have to take after 2020 to tackle climate change.

“Some countries want to use it to ensure high profile of various aspects,” he said. Whether pledges on finance and adaptation receive the same legal treatment as mitigation contributions remains a politically wrought topic at the talks.

There has also been little development on one of the thorniest issues of the negotiations – whether the division between developed and developing countries enshrined in the original Convention should remain in the new agreement. It is a problem that may require ministers to untangle, said Meyer.

“Between those two issues, differentiation and finance, there is not agreement on the nature of the outcome that we’re trying to have in Paris, so that is influencing negotiating strategy,” he said.

Jumeau added: “I hope I’m wrong, but why do I get the feeling that we’ll still be negotiating in Paris?”