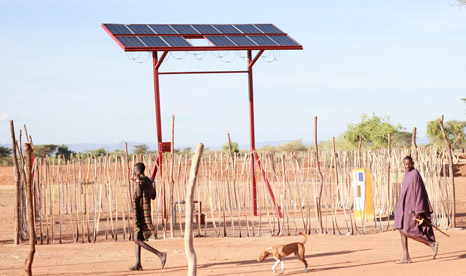 Projects like this solar powered water pump in Kenya can transform the lives of small communities (Pic: Practical Action)

The UN’s flagship climate fund could start investing in clean energy projects as early as 2015 after its board agreed how it will operate and who it will work with.

Four intense days of discussion in Songdo, South Korea ended in agreement by the 24-strong board on eight ‘essential requirements’ for the fund to come online.

These included safeguards to ensure it makes socially and environmentally sound investments, together with guidelines on who can distribute money from the GCF, and how much control countries will have over projects it backs.

Speaking from Songdo, Marcela Jamarillo, a climate finance expert from the London-based E3G thinktank, said the meeting had broadly been a success.

“The fund is ready – it has the basic elements. There is a lot of work to do in the details ahead of the next board meeting in October, but I think it is ready for those pledges to start coming in,” she said.

The focus will now turn to how the GCF will get any money.

Branded “too big to fail” by Denmark’s National Bank Governor Per Callesen, a board member, currently it has no reserves to invest in ‘green’ projects, and is relying on donor countries to hand it billions of dollars.

Who the pledges will come from and when they will be delivered is likely to be the subject of future fierce arguments.

US and Japan discussing w/each other what they can accept in terms of timeline for initial resource mobilization. Pressure’s on them. #GCF

A ‘resource mobilisation’ meeting for all potential donors has been scheduled for the end of June, kickstarted by a €1 million contribution today from France to the fund’s administrative costs.

Jamarillo said initial expectations are that some major developed countries will come forward with contributions before Ban Ki-moon’s climate leaders’ summit in September.

But it remains unclear if South Korea, China, Mexico and Brazil – all classed as ‘developing’ under UN frameworks – will offer support.

“It’s a little blurred at the moment. They expect the usual suspects to come forward very soon this year, but there was was a push to keep the mobilisation process open, so that other smaller countries and institutions can pledge next year,” Jamarillo said.

#GCF Board decides on investment framework: consistency with 2 degrees goal will guide its investments

There remain deep concerns from some NGOs over the GCF’s environmental integrity, and specifically the ‘safeguards’, which will be used to determine whether an investment should be made.

For the next three years these will be based on those laid down by the World Bank’s private-sector lending arm, the International Finance Corporation (IFC).

“We’re not happy about that – the IFC has a pretty terrible reputation on that stuff,” ActionAid’s Brandon Wu told RTCC in an interview from Songdo.

Wu also said there was a “danger” that some investments will be directed towards fossil fuels, due to the unclear language in the GCF’s guidelines.

“That leave the door open for lots of things that the GCF has no business funding. We have work to do on that – we brought up the idea of an exclusion list, and that got no traction on the board,” he said.

“The GCF will be a prime global channel to deliver public funds and to leverage private sector finance so that developing countries can build resilience against climate change and green their economies,” she said.

“There is now every reason to speedily mobilize the initial capitalization of the GCF, which should be at least 10 billion USD.”