UN has laid down the foundations for a Warsaw deal, but has yet to clarify when mitigation and financial pledges will be made 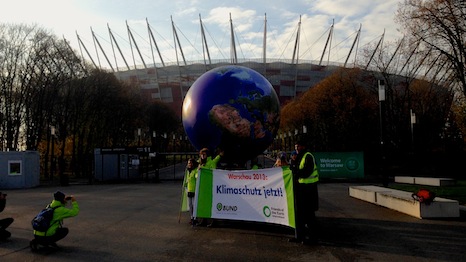 The UN today sought to clarify the path towards a globally binding climate change deal in 2015 with the publication of a proposed roadmap for countries to consider.

The text urges countries to clarify what they can contribute to a future agreement in terms of emission reduction pledges, and encourages them to intensify their efforts to reduce pollution until 2020, when the new treaty will come into force.

It asks parties to the UN to intensify their engagement with the climate change problem, in order to send a “strong political signal in favour of enhanced ambition”. This should be done in advance of the ministerial meetings held in June and the high-level summit organised by UN chief Ban Ki-moon for September 2014.

Countries are urged to ratify and implement the second commitment period of the Kyoto Protocol—currently the world’s only binding climate treaty, which the UN agreed to extend to cover the period between now and 2020 in the absence of a new deal on climate change. Several countries, including Japan, Canada and the US, have refused to ratify the second phase of the agreement.

But as it stands, the text contains no deadlines for agreeing on concrete pledges. Many see this as a key aspect of this year’s conference, which is aimed at carving out a timeline for the complex process of creating a globally inclusive, legally binding deal two years from now.

UN chief Christiana Figueres said that the text was put together in response to governments asking for a more concrete basis on which the negotiations this week could go ahead.

She called it an “important step forward” and said it should remind governments that “there is an urgent need for everyone to implement the agreements that have already taken place under the Convention, such as finance and technology.”

The document is still in draft form, and will be examined closely by negotiators before any final conclusions are settled.

“I’m quite sure that it will evolve very considerably from where it has started,” says Todd Stern, US climate change envoy, who arrived this week to represent Obama’s government at the UN climate talks in Warsaw.

While it is positive to have something concrete to work on, so far it does not deliver enough to ensure a successful outcome at this year’s conference, says Liz Gallagher, senior policy advisor at E3G.

“There isn’t enough clarity on how to deal with pre-2020 ambition,” she said. “It doesn’t result in concrete propositions to increase ambition.

“There are no deadlines for agreeing country offers.  The text mentions greater intensify domestic preparations and intensify high level preparations for Ban Ki-moon summit, but no firm deadlines and activities.”