Talks on climate finance continue at UN, but with little clarity on how much money to expect before Lima 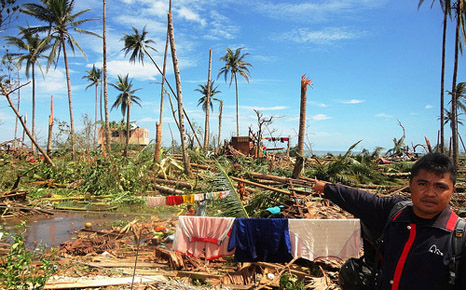 Cleaning up after climate change could cost trillions, economists have warned

The UN’s green bank is now almost ready to receive funds, but with six months left until the deadline for initial pledges countries remain uncertain about how much cash they need to raise.

Estimates on how much money needs to be in the Green Climate Fund by the November deadline continued to vary by billions during UN climate talks taking place this week in Bonn.

Peru Environment minister Manuel Pulgar-Vidal, incoming president of the UN’s December conference in Lima, told RTCC that he hoped the Fund could raise around US$10 billion by November.

“$10 billion will send a good political signal, and we are working together that the three countries—Poland, Peru and France—to convince countries that this is the only way to create confidence.”

Others have indicated that they would like to see more in the Fund. Speaking today on behalf of the G77+China negotiating bloc, Malaysia said they hoped to see US$15billion pledged by November. This figure was also supported by Hela Cheikhrouhou, the executive director of the Green Climate Fund.

‘Question of the day’

Others had more modest expectations. Speaking to RTCC at a conference of the Global Environment Facility in Cancun earlier this month, Peter Kalas, who represents the Czech Republic in the GCF, estimated that around US$5 billion would be in the Fund by November.

The figure that is eventually raised will be crucial in setting the tone at the UN’s conference in Lima a month later—the final session before a new international climate treaty is scheduled to be signed off in Paris 2015.

Developing countries want help funding new forms of low carbon energy and preparing for the worst effects of climate change. Without cash they argue they will not be able to move away from fossil fuels.

“The issue of finance is of paramount importance as it is a benchmark of what has been done in the past and what could be done in the future,” said a Chinese delegate, addressing a meeting in Bonn on Tuesday.

Earlier this year China demanded rich nations provide $40 billion by the end of this year, rising $10 billion a year to 2020.

The issue of how much will be pledged by November, and by whom, is “the eminent question at the end of the day” said Stefan Marco Schwager, who represents Switzerland in the GCF, in an interview in Cancun. “It has to be meaningful. You cannot come with a small sum—it has to be something that is credible.”

Frederic Glanois, a French representative for the GCF, told RTCC that too small a sum could prove “counterproductive”, as it would erode the fragile trust between developed and developing countries within the UN climate talks, and could prevent poor countries from making pledges to cut their emissions until promises of further cash.

All countries are agreed that finance must form part of the UN’s 2015 deal in Paris.

“US$100 billion is a commitment by governments, so it must be there,” said Mattias Soderberg, Chair of the Climate Change Advisory Group at Act Alliance. But talks this week in Bonn have illustrated the confusion that still remains over how, when, and by whom this should be delivered.

Many have expressed good intentions towards replenishing the Green Climate Fund during sessions  taking place this week.

German environment minister Barbara Henricks said Germany would make a “significant contribution” to the Fund, but others have pointed to national complications that may prevent the immediate promise of new cash.

“We cannot just pull meaningful amounts of money out of a piggybank,” said Schwager. A delegate for Japan said that, while the country is committed to continuing their financial contributions, exactly how much they provide and when “may vary according to external finances”.

A US delegate addressed concerns that developing countries would hold mitigation actions to ransom on the condition of financial pledges from developed parties.

He said that developed countries should base their contributions on their existing capacity, with supplementary provisions on what they could achieve in the case of international support, otherwise there could be a “very difficult situation before Paris where you’re trying to disentangle this conditionality.”

But China expressed concern over “blurred lines” emerging between developed and developing countries in terms of what they are expected to contribute in terms of climate finance.

This was in response to a text released by co-chairs in April, which referred to a “broadening of contributors” to the pool of climate finance.

He argued that countries considered “developing” under the UN’s Climate Convention should be exempt from pressure to donate climate finance, regardless of changes in the global economic landscape since the division was drawn up in 1992.

“After 2020, the economic realities might be changing, but the fact that developed parties dominate international economic waters … will not be changed,” he said.