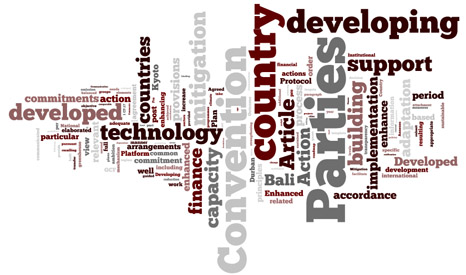 The key words and themes from China’s submission compressed into a word cloud (Pic: Wordle)

China’s government says industrialised countries should commit to new 2020 emission reduction targets of 40% on 1990 levels by the end of next month.

In a strongly worded submission to the UN’s climate body China also says developed countries must provide $40 billion of low carbon finance in 2014, rising by $10 billion a year to 2020.

“The pre-2020 mitigation gap would not even have existed if developed country Parties had committed to an emission reduction of 40% below their 1990 levels by 2020,” the document reads.

It adds that the new 40% carbon reduction goals should be a “minimum starting point” for post-2020 discussions, and must be submitted to the UN by 30 April 2014 “without any conditionality”.

Liz Gallagher, a UN climate talks expert from London-based thinktank E3G described the document as “hardline and provocative”, suggesting it would “raise eyebrows” among developed countries.

China’s proposed targets would represent a huge and politically unfeasible increase in the depth of carbon cuts for rich countries by 2020.

The EU is currently debating plans to set a 40% emissions reduction target on 1990 levels for 2030, but other developed countries ambitions are a long way off that target.

Climate finance flows have slumped after peaking at $30 billion a year between 2010-2012, although the imminent launch of a UN-backed Green Climate Fund is expected to see those levels rise.

A week of negotiations on a UN climate change agreement aimed at averting dangerous levels of global warming are scheduled to start in Bonn on Monday.

Countries have committed to working towards an emissions reduction deal that could be signed off in Paris next year, and come into effect in 2020.

China’s hardline position is likely to place it on a collision course with the US and EU, which both say any new global climate deal must involve all major polluters – including large developing countries – to make major reductions.

In a recent submission the US, which is the world’s second largest emitter after China, said the new agreement must reflect the growth in emerging economies since the UN climate body was set up.

“We would not support a bifurcated approach to the new agreement, particularly one based on groupings that may have made sense in 1992 but that are clearly not rational or workable in the post-2020 era,” it said.

In an interview earlier this week, lead EU negotiator Pete Betts told RTCC he felt most countries accepted that the Paris deal would involve them making carbon cuts.

He said: “It’s the nature of this process that nothing is agreed till everything is agreed on the real big picture 2015… but I would say it is positive that no-one is seriously pushing back on the notion that everyone has to produce their contribution in the 1st quarter of next year.”

The cloud – EU and US submissions distilled 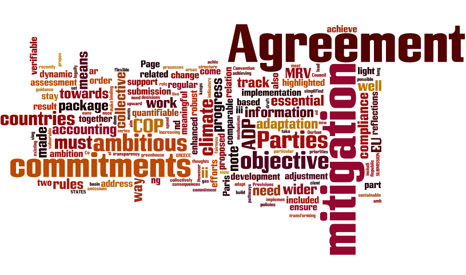 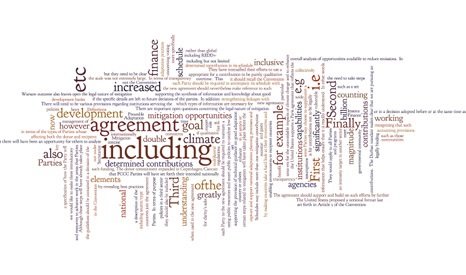