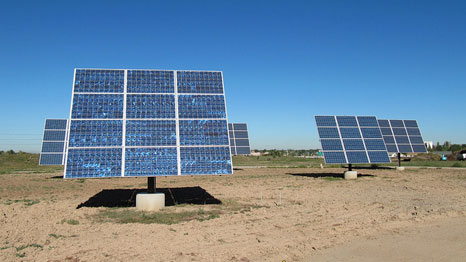 The Saudi Arabian Oil Company, the world’s largest oil business, is planning on adding more solar power, according to its chief executive.

The move would help to limit domestic fossil fuel consumption in the world’s largest exporter of crude oil, reports Bloomberg, and could give the state-owned company authority over renewable energy in the kingdom.

This would signal a policy reversal for the country, where renewable strategy has so far been run by King Abdullah City for Atomic and Renewable Energy (KaCare). This was established by Royal Order in 2010, but works outside the energy ministry.

KaCare’s official mission is to be the “driving force for making atomic and renewable energy an integral part of a national sustainable energy mix”.

In 2012, officials announced they were seeking $109 billion of investment to fund a plan to generate 41,000 megawatts, or around a third of its energy, of solar capacity by 2032.

But the Saudis, who are the world’s largest exporters of oil, have faced questions over their sincerity about tackling climate change.

At a meeting in Bonn in March, the Saudi Arabian delegate expressed the country’s reluctance to take any action ahead of developed states. “We are dealing with the messes that some have created,” he said.

“Now not only are we trying to develop, but we’re also dealing with the storm coming upon us, that we had no hand in.”

They also tried to weaken the language of the UN’s climate science report, the IPCC, which they accused of being too alarmist.

Aramco’s Al-Falih said that Saudi Arabia should avoid repeating Europe’s mistakes in adding solar capacity, by progressing “slowly and carefully”, he said. European nations had to roll back subsidies after instigating a boom in solar panel installations.

He said: “We don’t want to go fast like Germany and Spain and then have regrets down the road.”