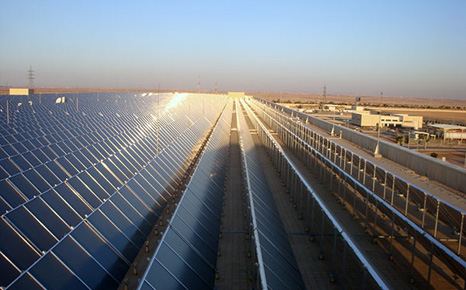 Saudi Arabia’s newfound commitment towards diversifying its energy mix away from fossil fuels is not greenwash, according to the country’s solar industry association.

Earlier this month the government announced it had set aside US$109 billion to build enough solar energy capacity to supply a third of the country’s future electricity demand.

And last week the country was given high marks for its clean energy planning in a report published by the EU and Gulf Cooperation Council.

Many doubt whether one of the world’s largest oil producers and keen opponent of climate ambition at UN talks has really changed its spots, but solar investors appear convinced.

“They realise their strength is always going to be in their oil production,” said Browning Rockwell, executive director for the Saudi Arabia Solar Industry Association called Saudi Arabia.

“They also realise that as their domestic economy grows and their population grows, more and more of that oil is being consumed domestically [rather than exported]. Renewables makes sense.”

The King Abdullah City for Atomic and Renewable Energy (KA CARE), the government department responsible for modernising the Saudi energy mix, proposed a target of 54GW by 2032 in its whitepaper launched in February.

Rockwell says many of the higher clean energy targets listed by the government will be some way off, but said the country regards itself as “an energy advantage country,” and is determined not to be left behind in the hunt for new energy systems.

The procurement process includes a target of 7,000MW for the first round for wind, solar photovoltaic, solar thermal or concentrated solar power, and geothermal projects, no less than 5MW.

Under the terms of the whitepaper developers will also be required to offer training to its employees and initiate research and development into new technologies. This would allow companies to set up an entire supply chain so the country would not need to rely on foreign expertise.

“One of the key things of the programme is job creation,” said Rockwell. “Saudis want to employ Saudis.”

Over the first five years of the programme, KA CARE expects 5,100MW capacity of renewable capacity to be added.

Rockwell is optimistic of the government’s short-term plan, warning against getting too excited about getting carried away with the big numbers over a long period of time.

“What they want to do is not unrealistic. These are achievable goals – it’s a question of do they have the will to do that,” said Rockwell.

“Expectations [were raised] because [there’s been] a lot of hype in the press. But realistically it’s going to take some time.

“I think that while it’s a very ambitious plan that they’ve got, they’ve got a long way to go. But the good news is that at least they’re moving forward.”

However, Rockwell said: “The whole ‘not in my backyard’ issue happens everywhere in the world.”

He said that this was not an issue unique to renewable project development – devleopers of housing estates, shopping malls, all receive the same reaction from tribes.

“If it’s something they [government] want to do they’ll pay for it,” said Rockwell. “Money talks everywhere in the world – if there’s money to be paid, it will move forward.

Pressure is also coming from within. Last weekend Saudi Prince Alwaleed Bin Talal called on the governmenton the government to move to renewables, arguing that shale gas has negated the need for OPEC oil.

“The world’s reliance on OPEC oil, especially the production of Saudi Arabia, is in a clear and continuous decline,” he wrote on his Twitter site.

“Our country is facing a threat with the continuation of its near-complete reliance on oil, especially as 92% of the budget for this year depends on oil.”