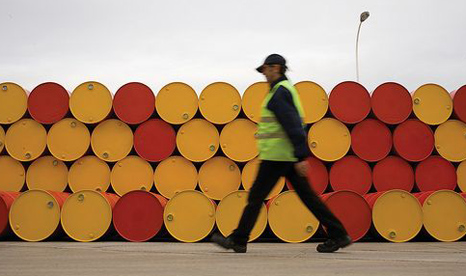 Shell has branded warnings its assets may become unusable if countries reach an ambitious global warming deal at the UN as “alarmist”, accusing critics of trivialising the issue.

In a punchy letter to shareholders ahead of the company’s AGM on Tuesday, Shell Executive Vice President JJ Traynor dismissed the ‘Carbon Bubble’ concept, which holds that oil and gas explorers risk wasting billions of investor’s cash by drilling for reserves that cannot be used without warming the planet to unsafe levels.

“It has some fundamental flaws and there is a danger that some interest groups use it to trivialise the important societal issue of rising levels of carbon dioxide in the atmosphere,” he wrote.

“We do not believe that at a minimum any of our potential reserves are at risk from any potential change in regulation from climate change or the carbon bubble/stranded assets concept.”

Instead Traynor told investors fossil fuel use will likely grow 40-60% by 2050, and argued that rather than cut oil and gas production, the best way to avoid dangerous climate change is to invest in carbon capture and storage technology.

“In the interim at least, CCS becomes a key technology for delivering something that approaches the 2C goal.”

Traynor added that Shell “did not see” governments taking carbon cutting actions consistent with avoiding warming above 2C, a level deemed dangerous by scientists and politicians.

In response, the team at Carbon Tracker, which produced the Carbon Bubble analysis, said the assumption that oil demand would continue to rise was flawed.

“Shell does not explain how it is solving the contradiction between the predictions of high oil demand and its acceptance of the need to address climate change,” they said in a statement.

Torbjørn Kjus, an Oil Analyst at DNB Markets told RTCC the tone of the letter is a sign that Shell has been rattled by the Carbon Bubble campaign and the effect it has had on creating shareholder uncertainty.

“They are taking this seriously, and if you talk with big companies in Germany, and ask them 6-7 years ago did they have any anticipation what was going to happen six years ago, they did not.

“Now some of them have lost 90% in value, so the energy world can change quicker than 30-40 years. To have a view that goes further than five years is extremely difficult these days.”

Shell’s latest intervention comes in a year of unprecedented scrutiny on the fossil fuel industry, a year before countries are set to sign off a global deal to cut carbon emissions under the UN.

The company’s annual report for 2013 warned than any agreement reached at the scheduled UN climate summit in Paris next December could affect its long term profits.

Backed by the World Bank, divestment campaigners are targeting leading academic institutions calling on them to ditch their oil, gas and coal holdings, placing further pressure on the industry.

And in January the UN’s top climate official Christiana Figueres said fund managers could be breaking the law if they failed to account for the threats of global warming in future investments.