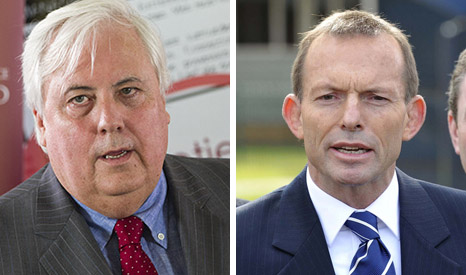 In a statement Palmer said the money would be better spent on pensioners, accusing the government of “blackmail” in trying to force an initial AU $1.5bn emissions reduction fund through Parliament.

“We’ll be voting against direct action, whatever form it’s in”, he told ABC in an interview.

An avowed climate sceptic and supporter of mining interests, Palmer’s four seats in the Senate mean his support is needed for the passage of any legislation opposed by Labor and the Greens.

Abbott’s DAP has been heavily criticised by environmentalists, economists and some UN officials, who say it is unlikely to curb the country’s greenhouse gas emissions.

“Looking at the numbers today, if we get rid of the carbon laws as they currently stand, then the best estimates would see Australia’s emissions increase 30% by 2030,” Erwin Jackson from the Melbourne-based Climate Institute told RTCC.

Australia currently has an international goal to cut emissions 5% on 2005 levels by 2020, and a recent submission to the UN indicated it’s currently on track to meet its obligations under the Kyoto Protocol, the world’s only legally binding climate deal.

So far the Abbott government has not given any clear indications whether it will boost this target as part of a pledge towards a global climate deal, set to be signed off in Paris next year.

The threat to scupper Abbott’s plans is the latest evidence of the toxic effect climate change policies have on Australian politics.

Carbon cutting measures have dominated the last two general elections, and contributed to the demise of Julia Gillard as Prime Minister in 2013, replaced in a coup by Kevin Rudd.

Australia has the highest per capita emissions of any developed country, with a mining sector that contributes nearly 10% of GDP, meaning any moves by central government to control carbon pollution are met with loud and powerful lobby groups.

“We’re not seeing an evidence based conversation about what we can, should and are already doing. It’s all being tied up in political quagmire,” said Jackson.

“What happens in the Senate is highly uncertain. Predicting anything in Australian climate politics is like nailing jelly to a wall.”

Last month the advisory Climate Council body, which lost its official mandate under Abbott, warned the country should prepare for hotter summers as a result of climate change.

But Palmer’s stance could conceivably leave the government stranded without any clear measures to arrest emissions, as Labor’s leaders say they are committed to seeing current climate policies maintained.

“Labor remains opposed to Direct Action, which doesn’t have a cap on pollution, and pays taxpayer dollars to the big polluters with no likelihood of any substantial reductions in carbon pollution,” the party’s environment spokesman Mark Butler said in a statement.

Even if the government does manage to drive the first installment of the DAP through, the impacts of this row and continued uncertainty over the government’s commitment to cutting carbon are likely to linger.

In February the head of the IMF Christine Lagarde said she was concerned that the country could lose its ‘pioneer’ status as being at the “forefront” of climate change issues.

A recent report in the Australian newspaper suggests the EU is unhappy with a decision to exclude climate change from discussions at the G20, set to be held in Brisbane in November.

It quotes an unnamed official as saying Canberra is now “disengaged” from the climate debate, adding “we’re not very happy about it… this is an issue of global importance, and the G20 are the global players on this.”

Calls for more action is likely to mount on the government at a climate summit hosted by UN chief Ban Ki-moon in September, and the UN’s main set of climate change negotiations in December, which take place in Lima.

At last year’s main meeting in Warsaw, Australian diplomats were accused of lacking respect, after turning up to negotiations wearing shorts and t-shirts, and “gorging on snacks”.

Privately some EU officials in Warsaw expressed their anger at Australia’s stance, which also offended delegates from small island states and least developed countries, which are acutely vulnerable to climate impacts.

And the Climate Institute’s Jackson says considerable international pressure may be needed to force the country to take talks seriously.

“There is a real risk is that Oz is going to try and free ride on what other countries are doing, and ignore the agreement they came to in Warsaw that they would come up with a new offer by April next year.

“If you want to be a credible player internationally you need to be thinking about climate change… that’s an important message for the government to get.”