Al Gore and Tony Blair are among those gathering at Abu Dhabi Ascent next week, ahead of Ban Ki-moon climate summit 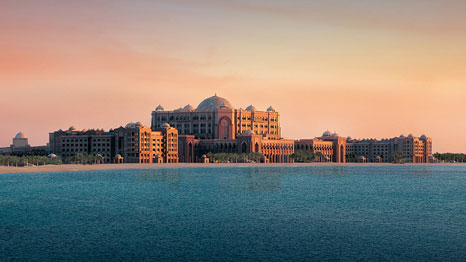 The meeting in Abu Dhabi is the only opportunity countries will have to discuss ‘bold pledges’ (Pic: Visit Abu Dhabi/Flickr)

Ministers, business and civil society will gather in Abu Dhabi next week to prepare the “bold pledges” they have been told to bring to a Climate Summit to be hosted by Ban Ki-moon in September.

The Abu Dhabi Ascent, which will take place on 4-5 May, will bring together high profile politicians and business leaders, including Al Gore, Tony Blair and Unilever CEO Paul Polman, in an attempt to ratchet up ambition before the Summit.

This will be the last opportunity for countries to discuss their intentions for the September gathering, where heads of states have been invited to announce bold actions to tackle climate change.

Many consider the Summit to be vital to the overall success of a UN climate treaty, scheduled to be signed in Paris next year, but so far few leaders have committed to attend.

Thomas Lingard, Global Advocacy Director at Unilever, who is attending the Abu Dhabi Ascent, told RTCC that it was a good opportunity for businesses and politicians to share ideas and initiatives with one another before the high-level meeting, which will take place alongside the UN General Assembly in New York.

“These are quite complex conversations at the political level, but more so at a multi-sectoral level. You can’t walk into these things and unveil something, so it is good to get people thinking about it earlier,” he said.

“I think if we get some quality conversations from some of the key players going in Abu Dhabi and if we can inspire a higher level of ambition by showcasing some of the things we think are possible, I think we can start working on September on a bolder trajectory.”

UN climate chief Christiana Figueres and UN Secretary General Ban Ki-moon are both attending the meeting, which will be hosted by Sultan Ahmed Al Jaber, the UAE’s special envoy on climate change and CEO of Masdar.

A UN spokesperson told RTCC that currently about 500 people had signed up to attend from all major countries, many of them ministers.

“The Abu Dhabi Ascent is the only meeting that will prepare for the summit and it’s a meeting where the participants will come together to learn about the possibilities and how they can raise their ambitions and what actions they can engage in and announce in September,” he said.

According to the agenda, participants will be provided with information on how to “prepare their leaders to participate in the Summit”, reflecting the weight placed on the attendance of heads of states in September. So far, only Marshall Islands president Christopher Loeak has publicly committed to attend the event.

The Ascent will take place over two days, in the form of bilaterals, presentations and focus groups, which will focus on issues such as deforestation, resilient cities, climate finance, agriculture and transport.

It will also be an opportunity for countries to demonstrate to one another that they have taken on board the findings of the latest IPCC report, said the UN spokesperson. The report was released in three instalments between September and April, outlining the latest research on climate science, adaptation and opportunities for mitigation.