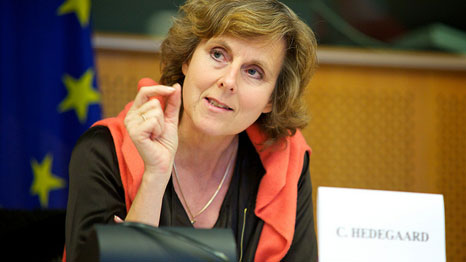 Speaking at the end of a visit to the country, Connie Hedegaard told RTCC the question of when China’s soaring emissions will reverse is a now a question of global significance, and one that she has discussed with government officials in the past week.

“They will have to do their calculations, but it is of relevance to the whole world when Chinese emissions will peak,” she said in an interview.

“Things have to be differentiated, and it is clear why the Chinese emissions have not peaked yet, but it’s clear that the sooner that peak point will be the better.”

Europe’s greenhouse gas emissions peaked in in 1990, and they have also started to decline in the US.

But China’s carbon pollution levels have risen sharply in recent decades as its economy has boomed, lifting millions out of poverty while at the same time devastating its natural environment.

Exactly when China’s emissions will start to decline is unclear, and depends on the strength of government policy.

A recent study by Chinese energy expert Jiang Kejun suggested that if China continues with its determined efforts to tackle climate change, emissions could peak as early as 2025. This would depend upon massive investment in renewables and a nationwide carbon pricing scheme.

The question will need to be tackled as countries gather to decide upon a global climate change treaty, which will be signed off under the UN in Paris next year. 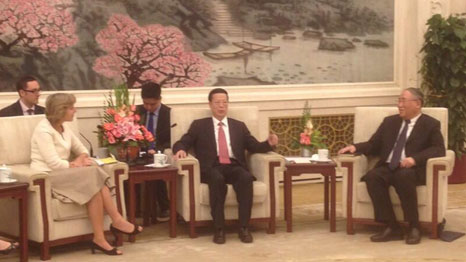 As the world’s biggest emitter, China’s participation in the deal will be crucial in determining whether the international efforts are enough to keep global warming below a globally agreed limit of 2C, after which the effects of climate change become more severe.

But there are still a number of differences between China and the EU that need to be smoothed out before this deadline, including the controversial issue of whether developing countries such as China should have the same legal obligations  as developed countries under the new treaty.

China and other like-minded countries have argued that the old division between developed and developing countries should be enshrined in the new agreement, as it was in the Kyoto Protocol. Others, including the US and EU, say that the booming economies of countries such as China, India and Brazil mean that efforts must be universal.

A recent submission to the UN by Chinese climate negotiators indicated just how far they are from resolving the point, demanding that developed countries increase their emissions reduction pledges to 40% below 1990 levels by 2020 – the level of cuts that the EU is likely to set as its 2030 target.

The issue needs to be reconciled so that work can begin on the more substantially difficult issues of the new agreement, said Hedegaard. A recent UN text attempting to distil all the views of the different countries suggests that these difficulties will be many.

Now is not the time to be talking about “red lines”, she said.

“Paris is 18 months from now. There are many difficult issues to be dealt with before we get there, so the sooner we can clarify exactly where are the most difficult issues we must deal with at the political level, the better, and I hope this visit will help us identify where those are.”

Domestically, it is clear that the Chinese government is committed to tackling climate change, said Hedegaard.  A recent UN report pointed out that 2013 was the first year in which Chinese investment in renewables was larger than Europe’s. Under its 12th Five Year Plan, China has committed to reduce its emissions intensity per unit of GDP by 17% by 1015.

Public anger about obvious environmental degradation – including hazardous air and water quality – has demanded engagement with the issue at the highest level of government, with President Xi Jinping committing to cutting polluting and creating an ‘eco-civilisation’.

Today, China’s National People’s Congress voted to amend the country’s 1989 Environmental Protection Law, which imposes harsher penalties for polluters and provides protection for whistleblowers, for the first time in 25 years.

“I think it was interesting yesterday that it was the first vice premier who wanted to meet with us. He was very much into the issue, very much into the strategy they are working with in China, so in that sense there’s a very positive impression of what they’re planning to achieve domestically,” said Hedegaard.

But, she added, “There are some questions as to how they translate that into international talks.”