Renewable energy grew to produce 8.5% of total electricity in 2013, including 44% of new installations 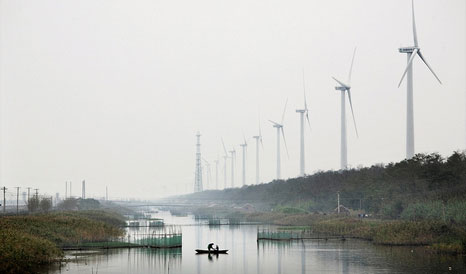 Renewable energy generated a larger share of the world’s electricity than ever before last year, despite dropping investments.

In 2013, renewables accounted for 44% of new installations of electricity generating capacity – the same figure as in 2012 – which meant that its total capacity worldwide grew from 7.8% to 8.5%, according to a UNEP report released today.

This was despite a 14% fall in investments to US$ 214.4billion. Overall, investment in renewables fell by $35.1 billion, largely as a result of the falling cost of solar power systems and policy uncertainty in many countries, the report says.

“A long-term shift in investment over the next few decades towards a cleaner energy portfolio is needed to avoid dangerous climate change, with the energy sector accounting for around two thirds of total greenhouse gas emissions,” said Achim Steiner, executive director of UNEP.

“The fact that renewable energy is gaining a bigger share of overall generation globally is encouraging. To support this further, we must re-evaluate investment priorities, shift incentives, build capacity and improve governance structures.”

The report also points out that 2013 was the first year that China invested more in renewable energy than Europe. While China’s investment was down by 6% to $56 billion, Europe’s fell by 44% to $48 billion. Meanwhile, the US saw a 10% decrease to $36 billion.

A solar boom in Japan, on the other hand, saw renewables investments increase by 80% to $29 billion.

Significantly, in Latin America, the Middle East and Africa, there is a trickle of wind and solar projects that have succeeded without any support from subsidies.

“Lower costs, a return to profitability on the part of some leading manufacturers, the phenomenon of unsubsidized market uptake in a number of countries, and a warmer attitude to renewables among public market investors, were hopeful signs after several years of painful shake-out in the renewable energy sector,” said Michael Liebreich, Chairman of the Advisory Board for Bloomberg New Energy Finance.

All these projects are having a significant impact on attempts to curb the world’s emissions. According to the report, energy-related CO2 emissions would have been 1.2 gigatonnes higher in 2013 had it not been for renewables.

This would have increased by 12% the gap between where emissions are currently heading and where they need to be by 2020 if the world is to remain on a trajectory to stay below 2C of warming – the upper threshold agreed upon by governments trying to tackle the problem.

Their efforts to do so will come to a head at Paris in 2015, where the UN will attempt to sign off a climate change deal, which will require the world to significantly reduce its carbon emissions.

The current state of the renewables market shows that such a deal should be possible, says Steiner.

“While some may point to the fact that overall investment in renewables fell in 2013, the drop masks the many positive signals of a dynamic market that is fast evolving and maturing.

“This should give governments the confidence to forge a new robust climate agreement to cut emissions at the 2015 climate change conference in Paris.”