China’s carbon emissions ‘could peak’ in 2025

A group of leading Chinese climate change experts says the country could ensure emissions peak in 2025 without damaging economic growth.

In an article published in Climate Policy, they argue the two degree warming limit agreed by world leaders in 2009 is still achievable, provided China takes further steps to cut pollution.

China accounts for 24% of global emissions, and its GDP is expected to overtake the USA’s before 2030. To avoid two degrees the country needs to cut emissions 70% by 2050 compared to 2020 levels.

Together with massive investment in renewables and efficiency, the authors recommend a nationwide carbon pricing scheme be deployed within the coming years, which they say can be implemented without damaging growth.

“The results suggest that recent and continued technological progress will make it possible for China to limit its CO2 emissions and for these to peak before 2025,” they say. 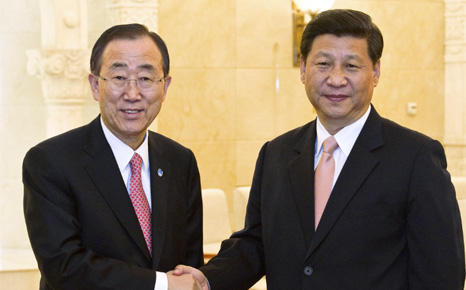 The paper sets high levels of ambition on renewables, efficiency, nuclear, and carbon capture and storage technologies, which could mitigate increases in coal and gas use.

In order to comply with what the authors label the ‘enhanced low carbon scenario’, by 2050 renewables must account for 48% of total power generation, with solar providing 1040GW and wind 930GW.

“A reduction of the necessary magnitude will require the near-simultaneous and successful deployment of all the available low-carbon energy technologies and massive international cooperation,” they say, adding: “improving China’s energy efficiency will increase economic competitiveness”.

The paper has generated a high level of interest outside China given the experts involved and their level of engagement with the government.

Lead author Jiang Kejun is part of the Energy Research Institute, which is affiliated to the National Development and Reform Commission, the influential government ministry that oversees China’s economic and energy strategy.

“You can say that given the position of the researchers, there are definitely some political implications there,” the World Resources Institute’s Ailun Yang told RTCC.

“Jiang Kejun has consistently been one of the most progressive voices within the system. He always gives out the most ambitious analysis and forecasts, but I think it’s important to note that in much of his analysis – even though they seem provocative – he was proven right”.

“The two degree scenario proposed by the authors would require wind and solar increasing to 9% of China’s total power generation, which is a sizable increase from today’s levels, but not out of line with penetration levels that have been achieved in other countries,” she told RTCC.

“The findings of this study could be important for Chinese policy makers to consider as they position themselves to negotiate a new international climate agreement by 2015. The authors point out that while China agreed in principle to a global two degree target in the Copenhagen Accord, its own target is not yet in line with such a goal.”

The paper is especially relevant given claims made by US climate negotiators that China’s mere presence puts 2 degrees out of reach and that a binding Chinese carbon cap is unthinkable.

The US is pushing for a ‘pledge and review’ agreement at the international climate negotiations, a system which is unlikely to ensure the level of emission cuts scientists believe are required.

Reports that leading Chinese climate experts believe it is possible to limit global warming are likely to place pressure on the USA to match that ambition, despite President Obama’s recent offerings in his new Climate Change Action Plan.

A recent report from the UN Environment Programme confirmed China’s status as the world’s leading market for renewable energy, driving $67 billion of investment in 2012.

Heavy pollution from coal power stations is forcing officials to consider alternative forms of energy – and raising the stakes for the country’s seven pilot emission trading schemes, the first of which launched in Shenzhen on June 18.

“The basic idea is that we have to establish a price level for carbon in China, and I think that is the right step to take,” said Yang, adding: “I think the enormous local impacts of China’s energy mix and dependence on coal is becoming a huge push for China to take even stronger climate mitigation action.”

The Shenzhen exchange accounts for 30 million metric tonnes of CO2 emissions, equating to a quarter of the region’s GDP and around 600 companies.

Nationally the country released 8 billion metric tonnes of greenhouse gases in 2012. Emissions rose 171% between 2000 and 2011.