US, China and EU agree to cooperate on UN climate treaty 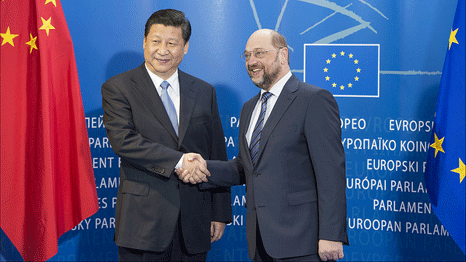 Strong words of commitment to a new UN deal on climate change have emerged from Brussels this week, following a series of high-level meetings with Ban Ki-moon, President Obama and Xi Jinping.

The busy week saw leaders from the world’s two largest emitters, along with the UN Secretary General, descend upon the EU, with climate change playing a prominent role in their discussions.

In a meeting with European Commission President Barroso, Ban encouraged the EU to adopt its 2030 package of climate and energy targets at the upcoming Council meeting in June.

This would mean they were ready to present at a climate summit that he will host alongside the UN General Assembly this year.

“I hope EU will lead this campaign and agree on these visions at the forthcoming June summit meeting, so that they can come with very ambitious targets to the climate change summit meeting which I’m going to convene on 23 September,” he said at a press conference today.

“We need European Union’s leadership on this matter.”

His call seems unlikely to be heeded considering the conclusions of the EU Council in March, where heads of state decided that the target of a 40% reduction in greenhouse gas emissions across Europe should be finalised by October at the latest.

This would be after Ban Ki-moon’s summit, but before the next round of UN climate talks, which will take place in Lima in December. The official deadline for countries to submit their contribution to the UN’s new climate treaty is March next year.

@jschmidtnrdc thought all parties had already decided that…

@yvodeboer_KPMG yes, but language at #COP19 wasn’t as explicit as this. Plus this is a Heads of Government statement so carries more weight

President Obama, US Secretary of State John Kerry, and Chinese President Xi Jinping joined Ban Ki-moon in committing to working with the EU for a strong deal on climate change in Paris 2015.

China, the US and EU are essential in securing the treaty, as the first, second and third largest emitters respectively. Each has a powerful input during the negotiations, but several important ideological differences remain, most notably between the level of commitment that rich countries should take on in comparison to developing states.

Their ability to smooth over these differences will be vital to the eventual success of the deal.

Speaking today, Commission President Barroso said that it was “incredibly important” that there was a global commitment to climate change, and that China and the US also showed leadership.

“We very much appreciate efforts that they are doing, mainly domestically, but we believe it is also important that internationally they show this leadership so that we can have success for the global community and for the future of our planet,” he said.

In a joint statement following Xi’s trip to Brussels, the EU and China said that they both “recognised the need to strengthen cooperation on climate change” ahead of the Paris Conference.

Meanwhile, Obama stressed that a failure to tackle climate change would threaten both the economy and security.

Secretary of State John Kerry met with the EU-US Energy Council today, where both sides reaffirmed their “mutual determination” to achieve a deal. They also committed to cooperate the transition to a low carbon energy system, though measures such as renewable energy, energy efficiency and carbon capture and storage development.