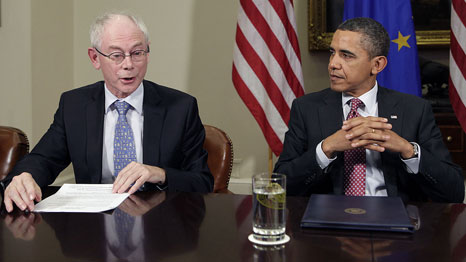 The US and EU say climate change is a “risk to global security”, amid growing concerns that the difficulties of a warmer world will go beyond extreme weather.

Following President Barack Obama’s meeting with EU leaders on Wednesday, a joint statement said that only by tackling climate change would both regions be able to achieve sustainable economic growth.

To this end, they reaffirmed their “strong determination” to sign off a proposed UN global climate change deal in 2015 that would prevent the world from warming by more than 2C – the point at which all governments agree the risks become unmanageable.

The deal “should therefore include ambitious mitigation contributions, notably from the world’s major economies and other significant emitters,” they said.

This last, seemingly mild phrase, could be seen as inflammatory to the Chinese. China is the world’s largest emitter of greenhouse gases, but it maintains that, since its economy is still developing, the US and EU member states should act first on tackling climate change.

The EU and the US said they are “intensifying their cooperation” on creating a low carbon economy through phasing out fossil fuel subsidies, cutting down the production and consumption of hydrofluorocarbons, promoting renewables and energy efficiency, fighting deforestation and mobilising both public and private finance.

@rtcc_sophie No. All well known positions. But, if EU, US manage to secure international HFC phasedown, that will certainly move the needle!

As part of this, they pledged to launch negotiations in the World Trade Organisation to liberalise trade on environmental goods, which they said would encourage green growth and sustainable development.

But they remained vague on any new pledges aimed at deeper cuts to emissions, which they said would be announced by March 2015 – the deadline for contributions for the new UN climate treaty, which will be signed off later in the year.

There is heavy pressure on the EU and US to bring new promises of some variety to a climate change summit held by UN Secretary General Ban Ki-moon on the sidelines of the General Assembly in New York in September.

Last week, the EU announced that its domestic energy and climate change strategy will not be finalised until October but that it would offer something “fully in line with the agreed ambitious EU objective for 2050”, which is an 80-95% reduction in emissions.

Campaigners have argued that the expected 40% emissions reduction target by 2030 will not be sufficient to hit this overall target.

Obama is not the only world leader taking a trip around Europe this week. Chinese President Xi Jinping is currently in France, where he will also discuss the possibilities for the UN’s deal on climate change. France will hold the presidency of the UN climate talks next year, when the treaty is expected to be signed off.

Meanwhile, UN Secretary General Ban Ki-moon is in Greenland, where he is meeting with the leaders of Denmark and Greenland to be briefed on the impacts of global warming in the Arctic. The purpose of the trip is to raise the profile of his September summit on climate change in New York.