Climate change is a rare common ground for environmentalists and the military, who both warn of growing violence 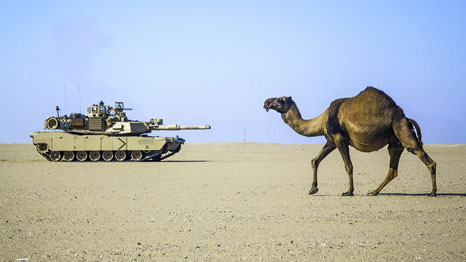 The failure to act on climate change is the world’s “gravest threat to human and national security”, according to a new report on war and conflict.

A “collective failure” by world leaders to treat climate change as a security threat is at odds with frequent warnings by military experts that violence could escalate as a result of ever scarcer resources, according to the Environmental Justice Foundation (EJF), a UK-based NGO.

In the report, entitled ‘The Gathering Storm: climate change, security and conflict’, they write that climate change could act as a “tipping point” for conflict, particularly in already fragile, post-war states.

“‘Climate security’ has brought environmentalists and militaries across the world into a unique accord: both are concerned by the effects that climate change does and will have on existing situations of insecurity,” it says.

Displacement and competition for resources could trigger new conflict, translating climate change into a serious threat to human rights, according to the authors of the report.

Availability of freshwater could potentially destabilize relations between competing nations, for instance, where the source of the water straddles international boundaries. Inadequate supplies as rainfall becomes more erratic could lead to water being used as a weapon in times in conflict.

Water supplies are already a source of tension in Central Asia, where the fall of the Soviet Union led to Uzbekistan, Turkmenistan, Afghanistan and Tajikistan competing for control of the Amu Darya river basin, which extends across the four countries.

The governments routinely accuse one another of breaching the quota of water they are permitted to extract from the basin, which reportedly led to Uzbek troops using force to gain control of water installations in Turkmenistan.

Yet international organisations have been reluctant to consider climate change as anything other than an environmental consideration – a “principle barrier” to recognizing the “true costs of climate change”.

“Governments and international organisations must break the confines of the current debate and act now to mitigate climate change, create effective strategies for adaptation and apply new protections for those who are already affected and who will be affected in the future,” said Steve Trent, head of the EJF.

At the UN General Assembly in 2013, the European Union listed one of their priorities as pursuing “climate diplomacy for conflict prevention”.

Meanwhile, military experts have reinforced that climate change could pose a threat to national security.

A Pentagon report released earlier this month highlighted the pressure on international governance that global warming will apply.

“The pressures caused by climate change will influence resource competition while placing additional burdens on economies, societies, and governance institutions around the world,” it said.

“These effects are threat multipliers that will aggravate stressors abroad such as poverty, environmental degradation, political instability, and social tensions.”

Last week, retired US Brigadier General Chris King told RTCC that climate change would be like a “100 year war” without an exit strategy – a prospect he described as “scary”.

Speaking on Tuesday in Parliament, the UK’s special representative on climate change Sir David King told MPs that climate change was an issue that needed to be “carefully addressed” by militaries across the world, due to their dependence on oil in conflict situations.

Looking back to World War Two, he said: “Churchill knew that managing oil supplies in any war situation was absolutely crucial. The Department of Defense in the US has a very clear understanding of the threats to its actions that this whole issue brings to bear.”

He added that the use of solar power by UK armed forces in Afghanistan has been “transformational”.