Ten reasons why food will be scarce in a warmer world

NEWS: Oxfam scores the world on its action so far to help farmers prepare for the shocks of climate change 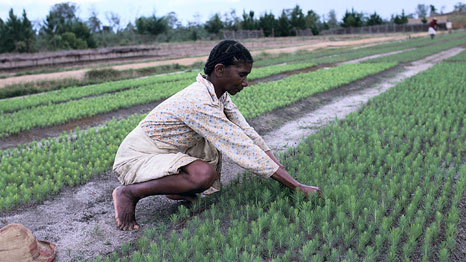 The world is badly prepared to deal with the impacts to food supplies caused by climate change, warns a report by Oxfam.

As the Intergovernmental Panel on Climate Change, the UN’s climate science body, prepares to release its new report on the effects of climate change, an Oxfam “scorecard” shows how governments, international organisations and investors have failed to create a world that can deal with more frequent shocks to global food supply.

The next instalment of the IPCC report, currently under discussion in Yokohoma, Japan, is expected to warn that climate change will cause global agricultural yield to decline by 2% each decade, while at the same time the demand for food will increase by 14%.

In addition, Oxfam estimates that cereal prices could double by 2030, half of which would be a result of climate change.

But, they say in the report, “Hunger is not and need never be inevitable” – more action could ensure that people are less likely to hungry, even as the world gets warmer.

Here’s how the world need to prepare – and how it scores so far.

If a country is going to adapt to climate change, it needs money. Developed countries pledged in 2009 to provide US$ 100bn a year from 2020, alongside $30bn to be delivered between 2010 and 2012. But this money is not split evenly between adaptation and mitigation. This means that there is a shortfall between the amount provided and the amount needed to implement the necessary adaptation measures.

Social protection schemes can ensure that no one is left desperate when a food crisis hits. Such programmes could include school feeding, cash transfers and employment guarantee schemes.

In rich countries, most people are covered by some form of social protection, but globally this figure is just 20%. In many poor countries, such as Zambia, Mali and Laos, it is less than 5%, leaving people less able to absorb shocks when food supplies decline.

Humanitarian aid is the last port of call when a food crisis hits. Over the past decade, UN calls for money to help out those facing disasters have on average raised only 66% of the amount requested – and the gap is widening as the cost of aid increases. The shortfall has approximately trebled since 2001. Climate change could be an added burden on an already stretched pool of resources.

Food stocks provide stability in times of erratic harvests and high food prices, but the gap between the volume in storage and the amount being used is widening, leaving nations more vulnerable to starvation and financial problems when the next disaster hits. The depleted stores are due to extreme weather, the diversion of crops towards biofuels, and a lack of maintenance.

Women who live in rural areas are knowledgeable about seeds, crops and water. Their expertise could be harnessed to develop strategies on how to produce more food in a warming world. But so far, this has been a wasted opportunity: less than 5% of women in West Asia and North Africa own land, which means they have no incentive to invest and can’t choose how it is farmed. They are also shut off from vital weather information, which tends to be passed between men in public spaces, and is rarely passed on to the women.

Adequate public investment in agriculture is essential in helping food producers become more resilient to climate change, but assistance to agriculture has been slashed during the last 30 years. Investment has fallen from around 43% in the late 1980s to around 7% today.

This is despite a pledge from African leaders in 2003 to increase their spending on agricultural to 10% of their national budgets. A decade later, just four out of 20 countries surveyed have met this target.

Research can help scientists figure out how to prepare the agricultural sector for a warmer world. Over the last 100 years, global seed diversity has declined by 75%, depriving communities of plants that may have been better suited to the local climate. Research can recover old varieties and develop new ones, but the investment is not yet there. In poor countries, an average of just $0.55 is spent on research per $100 of agricultural output, compared to $2.16 in rich nations.

Over 80% of global agriculture, and 95% in Africa, is kept watered by the rain. As climate change disrupts the once predictable cycles of wet weather, farmers across the world will suffer.

In southern Europe, just 16% of land is irrigated, leaving them poorly equipped for a hotter and drier climate. In Africa, the problem is even worse, with irrigation covering less than 1% of arable land in Niger, Burkina Faso and Chad. In many developing countries, the irrigation that does exist is restricted to big industrial farms, starving communities and small-scale irrigation projects of water.

Farmers can depend on insurance to help them cope with climate change shocks – but only if they’re covered. But the majority of farmers across the globe are not. While 91% of farmers in the US have crop insurance, this compares to only 50% in Australia, 15% in India, 10% in China and 1% in Malawi and most low-income countries.

Data on what the weather’s going to be like is important in guiding farmers on how to look after their crops. But the concentration of weather stations varies greatly around the world, and is particularly low in the countries that are most vulnerable to climate change impacts.

While in California, for instance, there is a weather station every 2,000km square, in Chad, they only make an appearance every 80,000km square – an area roughly the size of Australia – which means the data may not even be relevant to their location.