NEWS: Delegates from over 100 countries are in Yokohoma to discuss latest UN study on climate risk 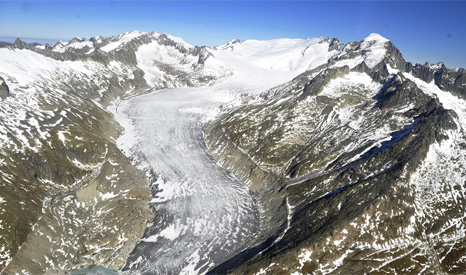 Rapidly decreasing glaciers in Switzerland are one of the potential signs of a warming world (Pic: UN Photos/Jean-Marc Ferre)

Government officials, scientists and economists are meeting in Japan to discuss the conclusions of the UN’s latest blockbuster climate change report.

The latest findings from the Intergovernmental Panel on Climate Change (IPCC) are likely to focus on the impacts a warming world will have on food, water, economic growth and security.

Last September the IPCC issued its guidance on the physical science of climate change, stressing that scientists are now 95% certain that temperatures are rising, and that humans are primarily to blame.

A draft of the forthcoming report seen by RTCC, which is due out on March 31, warns that climate change could be “irreversible”, leading to crop losses of 2% decade on decade.

“Risks to the overall global economy and Earth’s biodiversity become moderate for warming between 1-2 degrees Celsius and high around 3 degrees (above levels at the start of this century),” it says.

“With or without adaptation climate change will reduce median (crop) yields by 0 to 2% per decade for the rest of this century as compared to a baseline without climate change.”

“The management of risk related to climate change impacts would be the dominant approach emerging from this assessment,” he said.

A study released by Oxfam earlier on Tuesday said rich and poor countries are “woefully unprepared” for the threats to food security from extreme weather events.

Based on some of the preliminary findings from the IPCC’s latest research, it added climate change could lead to a world with 25 million more malnourished children under the age of five.

“Paying for climate adaptation need not break the bank. Poor countries’ adaptation needs are estimated to be around $100bn a year – equivalent to just five per cent of the wealth of the world’s richest 100 people,” said Winnie Byanyima, Executive Director of Oxfam International.

Compiled from research since 2007, this latest report involved the work of 309 authors and editors from 70 countries, together with 1,729 expert and government reviewers.

The document which interests the media, politicians and commentators is the Summary for Policymakers, a 29-page booklet derived from 30 chapters in two volumes.

Discussions will take place all week, as delegates analyse and argue over elements of the report, which could form the basis of government policies on climate change over the next decade.

The IPCC’s last WGII report in 2007 was heavily criticised after it included a line claiming Himalayan glaciers could disappear by 2035.

In 2010 the IPCC admitted this was incorrect, adding that the wider conclusions of the study were “robust, appropriate, and entirely consistent.”

Chris Field, Co-chair of Working Group II, says he’s confident the level of scrutiny afforded to the 2014 version will ensure readers can be confident in its assertions.

“With every line carefully checked and rechecked, Working Group II has produced what I believe to be the most complete, thorough, and authoritative assessment on climate change impacts, adaptation, and vulnerability to date.

“One of the things I like most about the report is that it combines cold, analytical realism, with a careful look at a broad range of possible solutions.”