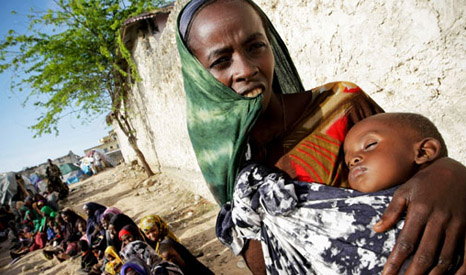 The 2011 drought and famine in East Africa was linked to climate change by the UK’s Met Office (Pic: Stuart Price/UN)

Africa could face an onslaught of crop failures, diseases and extreme weather events as a result of global warming, a UN panel of scientists is likely to warn later this week.

The findings will be discussed at a meeting of the Intergovernmental Panel on Climate Change (IPCC) in Yokohoma, Japan, before their final approval and publication on March 31.

Millions could be affected as a result of coastal and urban flooding, while fresh water resources in the west and south are expected to become under increasing stress.

The continent, which is on course to see its population double to 2.4 billion by 2050, could see its development plans impacted as food and fish stocks diminish.

Below we’re outlined some of the regional findings relating to Africa, from a draft of the report RTCC has seen this week.

– Decreased crop yields of 18% for southern Africa to 22% across sub-Saharan Africa.

-African horse sickness and bluetongue may expand their ranges.

-Annual landed value of fish estimated to decline by 21%, 50% decline in fisheries-related employment, total annual loss of US$ 311 million to regional economy.

-Prolonged droughts will likely worsen other health diseases, such as meningococcal meningitis.

-Severe child stunting (leading to higher mortality risk) could increase by 31 to 55% across sub-Saharan Africa due to climate change by 2050.

-Combination of climate change and socio-economic factors could drive the number of under-nourished children under the age of 5 to 52 million by 2050.

-African countries are experiencing some of the world’s highest urbanization rates and the urban populations in Africa are projected to triple by 2050, increasing by 0.8 billion.

-Direct and indirect effects of climate change could compound existing stressors, such as deforestation, forest degradation, land-use change, and pollution.

-All countries within the Zambezi River Basin could contend with increasing water shortages due, in part, to climate change.

-Increased flows in the Mara, Nyando, and Tana rivers in Eastern Africa, which could lead to rising risks of flooding, loss of life, and increased damages.

-Climate change is expected to significantly reduce groundwater recharge in already dry locations, such as the Sahel, the Horn of Africa, and southern Africa.

-Climate change effects, such as increased ocean acidification and warming ocean temperatures will negatively affect coral reefs and fisheries, and will increase the cost of coastal protection.