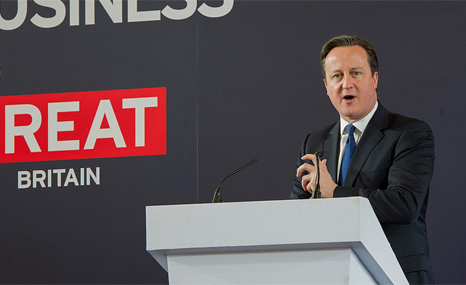 David Cameron has told MPs he “very much suspects” the torrential rain and heavy flooding experienced by the UK recently is linked to climate change.

The comments are likely to anger many climate sceptics within the Conservative party and cabinet, which many fear would like to scrap some of the country’s tougher carbon cutting regulations.

The British Prime Minister was responding to a question from coalition colleague Tim Farron, President of the Liberal Democrat party.

Tim Farron says some of the flooding in his constituency is due to climate change. PM agrees. #pmqs

@RTCCnewswire PM Cameron is recognising what science is telling us. Climate CHANGE is not just about warming

Labour leader Ed Miliband also made the connection between recent extreme weather and global warming, calling for a review of the country’s flood and climate plans.

Cameron added he was “committed to carbon reduction targets”, highlighting the role of the Green Investment Bank in delivering funding for green infrastructre projects.

The debate over the impacts of climate change in the UK has gained profile in recent weeks, largely as a result of rising flood waters and severe storms that have battered the country.

Yesterday the Thames Flood Barrier closed for the 11th time in as many days, with engineers warning that high tides and surging flood waters threatened the UK capital.

The government has been under heavy criticism for its response to the bad weather, after it emerged that funding and staff numbers to the agency responsible for addressing flooding have been slashed.

Environment Minister Owen Paterson, a noted climate sceptic, has defended the cuts and claims £2.3bn will be spent on flood defences by 2021.

ANALYSIS: What happened to the UK’s ‘Greenest Government Ever’?

Critics say Paterson’s refusal to accept the climate is changing means the UK will be increasingly unprepared for the heavy rains and storms that scientists say will have a greater impact due to a warming atmosphere.

Andy Atkins from Friends of the Earth says Paterson’s credibility is “sinking fast”, and called on the government to review its flooding plans.

“The Environment Secretary says the government is spending more on flood defences, when in fact he’s presided over a real-terms cut and hundreds of Environment Agency jobs are under threat – his refusal to accept the science of climate change may be blinding him to the human costs of the consequences of this.”

He added: “With everyone from the Government’s climate envoy to the President of the NFU warning that climate change will increase flooding, the storm-damaged Environment Secretary has serious questions to answer.”

The UK’s contribution to cutting its share of carbon emissions linked to global warming has also come under scrutiny today.

Lord Deben, head of a government appointed advisory body on climate change, told MPs the UK’s current plans to cut emissions 50% by the mid-2020s should not be changed, citing the need to offer policy stability for investors.

The UK is also engaged in negotiations over the next set of EU climate targets from 2020-2030, with a draft due out at the end of January.

Yesterday it joined France, Germany and Italy in calling for a 40% emission reduction target.