EU 2030 climate and energy package – all the reaction 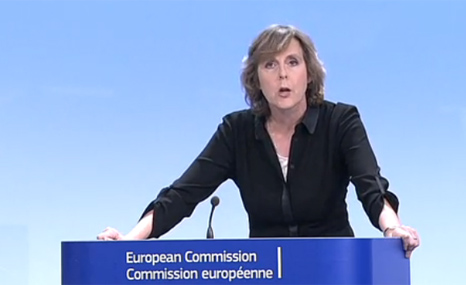 EU climate chief Connie Hedegaard: “A 40% emissions reduction is the most cost-effective target for the EU and it takes account of our global responsibility. And of course Europe must continue its strong focus on renewables. That is why it matters that the Commission is proposing today a binding EU-level target. The details of the framework will now have to be agreed, but the direction for Europe has been set. If all other regions were equally ambitious about tackling climate change, the world would be in significantly better shape.”

Ed Davey, UK Energy and Climate chief: “Today’s proposals are a step in the right direction towards an ambitious emissions reduction target for Europe. They provide the flexibility to tackle climate change in the most cost-effective way, so that British consumers aren’t paying over the odds to go green. This package backs the green growth agenda I’ve been working for with other European colleagues.”

Dirk Forrister, IETA CEO: “The Commission’s proposal to put forward a GHG emission reduction target for 2030 provides clarity on the policy direction for the EU. It is troubling that the connections to global markets appear to end with the emphasis on domestic action alone. If the Paris Climate Summit in 2015 is to succeed in building a cost effective global framework for protecting against warming over 2 degrees C, global markets are essential –  these must be practical and effective and, given the experience of the EU ETS and the CDM, Europe must look to provide leadership”.

RenewableUK Chief Executive Maria McCaffery: “While it is pleasing to see the EU Commission recognise that renewable energy is a key part of future energy solutions across Europe, the lack of ambition in not ensuring there are national binding targets for renewable energy is a disappointment. This is a missed opportunity for member states to take collective and serious action on the drive for clean, sustainable, renewable energy, which is the best option for reducing our carbon emissions.”

Frauke Thies, EPIA Policy Director: “27% renewables by 2030 is indeed barely more than the Commission’s business-as-usual scenario. In addition, it is an EU-wide target without binding national breakdowns. We are now looking at the European Council to make this supposedly binding target meaningful, by turning it into real national binding targets”

STA Head of External Affairs Leonie Greene: “ From a climate perspective Europe needs to expedite, not slow, renewables deployment. From an economic perspective weakening ambition is nonsensical given the massive investments in renewables our international competitors are making. The 27% renewables target is no more than the Commission expects under business as usual, so the Council and Parliament must improve this significantly if it’s to have any meaningful effect”.

Lord Stern, Climate Change Economist: “It is very important that European leaders accept the Commission’s proposed target for reducing emissions by 40 per cent by 2030 compared with 1990 as the minimum ambition they must set at their summit in March … Billions of euros of private investment in the low-carbon transition could be unleashed if the 2030 target gives greater confidence to companies, particularly in the power sector, that the European Union is on an optimal path towards the long-term goal of reducing emissions by at least 80 per cent by 2050 compared with 1990.”

RT @alstomeuoffice: #EU2030 @EU_Commission gets it wrong: #RES target at 27% too low even if it’s binding #Businessasusual

Stephanie Pfeifer, Chief Executive of the Institutional Investors Group on Climate Change: “A 40% emissions reduction target is the minimum necessary to keep Europe on course for a low-carbon economy as outlined in the EU’s 2050 Roadmap. Achieving this target is well within member state capabilities and crucial for long-term policy certainty. Plans for reform of the Emissions Trading Scheme have been long-awaited and the establishment of a reserve mechanism which can support a strong carbon price is a welcome move.”

Lit Ping Low, climate economist, PwC: “These are important numbers from the European Commission on energy and climate change. The 40% GHG reduction target by 2030 relative to 1990 levels reinforces the UK’s goal of halving emissions by the end of the fourth carbon budget. But setting a target is one thing, achieving it is another. Even to meet the 2020 targets, much of the low-hanging fruits, which are primarily on energy efficiency, have been exhausted. The UK, and several other EU countries, already has one of the lowest energy intensities in the world.”

Katja Hall, CBI Chief Policy Director: “This package puts us on the right path to delivering a competitive, low-carbon future. It’s important that member states have flexibility to decarbonise in the most cost-effective way. An emissions reduction target of 40% is ambitious and credible, and reflects what we have been calling for. But targets are only as good as the policies that support them, and the EU Emissions Trading System must continue to be the cornerstone of the EU’s climate policy.”

Ruth Davis, Greenpeace UK Political Director: “A 40% greenhouse gas target is simply not enough to set the pace towards a 2 degree global climate deal. A weak target and ETS reforms that will only kick in after 2020 are unlikely to see off king coal from our energy mix. And a renewables target which looks like a parody of the US’s favoured ‘pledge and review’ approach to climate planning is scarcely an invitation to clean tech investors.”

Jason Anderson, Head of Climate and Energy, WWF: “I’m sure the fossil fuel lobbyists will sleep well tonight. It is now up to Member State governments to show the political leadership needed to inspire Europe towards an industrial and economic revolution that will provide for both people and the planet.”

Sven Harmeling, CARE International: “If the EU does not deliver its fair share of emissions reductions through the 2030 climate and energy package and live up to its responsibilities, it will be condoning the devastation of millions of livelihoods and increasing poverty for the world’s poorest and most vulnerable people.”

Mark Kenber, The Climate Group: “The 2030 framework can act as a real driver for clean economic growth. Ministers must recognize this opportunity when they meet in March, and build on the Commission’s plan, especially in the interests of an ambitious and effective global deal in 2015.”