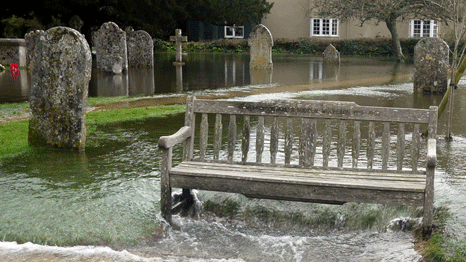 The heavy rains and floods that have besieged the UK over the last month will cost the insurance industry £400 million, says consulting firm PwC.

This could rise over the next few weeks, if the Environment Agency’s predictions of further flooding come to pass, warns Mohammad Khan, an insurance partner in the company.

“The impact of the extreme rain and floods of recent months has become progressively worse. For the UK insurance industry, although this may not be the final estimate of the full costs of all the weather we have had, indications are that this could leave the industry up to £400m out of pocket,” he says.

“This estimate could develop further, particularly given the further flood warnings in place in the UK this week.”

So far, about 1,800 properties have been damaged by the floods. Khan adds that, when taking into account the uninsured losses of the floods, the true cost of December and January’s freak weather is likely to rise above the £400m mark.

The Environment Agency warned today that communities across the south of England should prepare themselves for yet more flooding, as rivers including the Avon, the Parrett and the Severn continue to rise.

Last night London’s Thames Barrier was closed for the 12th time in as many days.

Prime Minister David Cameron yesterday linked the storms to climate change – a controversial statement within the increasingly sceptic Conservative party. He said he “very much suspects” that the unusual weather could be linked to a rise in temperatures.

Ed Miliband, leader of the opposition Labour party, also drew on the connection, and called for a review of the country’s flood and climate plans.

The current Coalition government has come under fire for their proposed flood insurance plan, which fails to take into account their own projections of the increased risks caused by climate change.

The new scheme, called Flood Re, is likely to cover just 500,000 homes, while the government’s own Climate Change Impact Assessment reveals that 970,000 homes are likely to be at significant risk during the 2020s as the climate continues to change.

“With wild weather and floods causing travel chaos, it’s appalling that the Government is cutting staff from the Environment Agency who are working to defend the country from flooding,” said Friends of the Earth campaigner Guy Shrubsole in a statement.

Environment Secretary Owen Paterson has meanwhile faced criticisms from MPs and campaigners that budget cuts will lead to a downgrading of the UK’s flood defences and losses of Environment Agency staff.

Owen Paterson speaking. Repeating spin that more being spent on flood defences in this spending period than before

Excellent question from @meaglemp: Why do Paterson’s 4 priorities for Defra not include flooding? #flood

Across the channel, a Munich Re report shows that summer flooding in Germany and central Europe was the costliest event last year in terms of economic damage, with a price tag of US $15.2bn, while insured losses came to $3bn.

This is greater than the overall economic losses from the typhoon which hit the Philippines in November, which cost some $10bn.