If climate change had a catwalk, divestment would be this year’s Naomi Campbell. 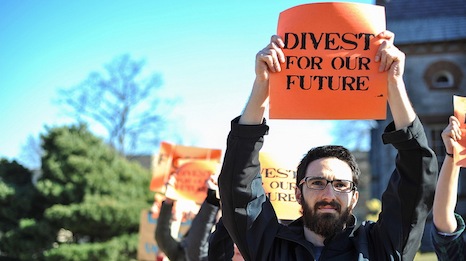 For climate activists, 2013 will be remembered as the year that divestment shed its indie skin and hit the mainstream.

Backed in the US by campaign group 350.org and UK-based student campaign group People & Planet, divestment activists try and persuade large investment funds to move their money away from holdings in fossil fuel companies.

As a protest tactic, divestment is probably best known for its role in bringing on the end of apartheid in the 1980s. Campaigners hope that a similar movement can contribute to the downfall of companies that create carbon dioxide by burning oil, gas and coal.

“This is the first really big divestment campaign to come along in a generation,” says James Farndon, who is helping to organise the Fossil Free campaign at  People & Planet.

“For a long time people haven’t seen divestment as a political tool. Now we’re going through a process where not only is divestment being seen as a political tool, but people are realising that fossil fuel companies are the key factor behind climate change, and we should be focusing our attention directly onto those companies.”

While it has already been running for a few years in America, 2013 is the year that divestment really entered the public consciousness, with San Francisco being one of many cities to decide to cut ties between its pension fund and the fossil fuel industry.

UN climate chief Christiana Figueres used its growing momentum to warn the coal industry of a “business continuation risk” at a recent summit in Warsaw, while major development banks are also assessing their levels of fossil fuel funding.

There are 400 divestment campaigns underway at American colleges and universities, while the nation’s capital, Washington DC, is currently debating a Fossil Fuel Divestment Act.

Across the UK, there are now 39 campaigns trying to persuade universities to divest their endowment funds, while the Quakers came out as the first institution to withdraw its money from fossil fuels.

“It has come to the fore in a way that definitely wasn’t the case in 2012,” says Ben Caldecott, from Oxford’s Smith School of Environment and Enterprise, who earlier this year released a report looking at the impact of the divestment campaign on the fossil fuel industry.

“Just in the course of two to three years it has reached a stage that took previous divestment campaigns a much longer period of time,” he told RTCC.

“That’s down to social media and the fact that it has been effectively organised.”

But despite its enthusiastic following across two continents, the divestment campaign has yet to start strangling the flow of funds to the fossil fuel industry to the extent that it will make a difference.

Apart from the Quakers, there have been no promises to divest so far in the UK, and large investment companies have so far steered clear of promises that would cut their ties with the fossil fuel industry—at least on ethical grounds.

Craig Mackenzie is Head of Sustainability at Scottish Widows, which has divested from companies that deal purely in coal mining. But this, he said, was a “purely financial decision”, influenced by the increasing riskiness of coal as an investment opportunity.

He adds that, in the case of pension funds, which have a legal obligation to maximise the financial returns for their members, divestment is not even legally possible unless it can be proved that fossil fuels places its shareholders on financially shaky ground.

Even activists are candid in admitting that the funds they convince companies to divest are unlikely to make much difference in the enormous fossil fuel industry. But many believe that the aims of the campaign go beyond this: they hope to change how people regard the companies, stigmatising them and removing their social license to operate.

With coal, this is easy, says Mackenzie, but the task of stigmatising the industry is more complex when it comes to gas—cleaner to burn than coal, and seen by some as a stopgap while the world transitions to renewables—which is often tied to oil companies.

“That’s a bit of a problem if you’re trying to stigmatise oil and gas companies, and say they are evil like apartheid,” he said.

“It’s quite hard to do that if one of the products oil and gas companies make is part of the solution for the time being. There are some people who want to say gas is evil and we should only invest in renewables, but frankly they’re living in cloud cuckoo land. There is no way that we can move straight from where we are now to 100% renewables overnight or in any reasonable timescale.”

Caldecott says that the divestment campaign must be seen in the context of a “a parallel process of constantly shifting social norms”.
While doubtful that the movement will be as successful as the 1980s apartheid campaign, he says that it could achieve some success.
“Divestment campaigns have been universally successful in changing legislation and regulation in some way or other. If the campaigners can help to encourage regulations that put pressure on fossil fuel companies, that’s going to have much more effect than divestment itself.”