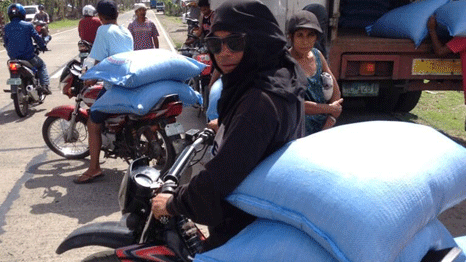 A 40kg sack of seeds is hardly a glamorous Christmas present, but for the Filipino farmers hit by Typhoon Haiyan last month, it could a life-saving delivery.

The UN’s Food and Agriculture Organisation (FAO) has started to provide the first wave of emergency seeds supplies to residents living in some of the hardest hit rural communities across the Philippines.

These, along with 50kg bags of fertiliser, tools and small irrigation water pumps, will allow farmers to nurture another crop of rice and corn, ready to be harvested in March next year.

When the storm hit the islands in November, it was the beginning of the planting season. This meant that the 2014 harvest was decimated. Having lost family members and possessions to the typhoon, farmers are now confronting the fact that their livelihoods have also been destroyed.

“Nothing could be more beneficial than the seeds we so desperately need to make sure we can plant in time for this planting season,” said Merlyn Fagtanac, a farmer from Dumalag, whose farm and house were destroyed by the typhoon. “We lost everything but at least now we can look forward to the coming rice harvest.”

Her two-hectare rice paddy field has already been cleared and cleaned for planting. She is just one of the 1040 farmers from the Visayas region who will benefit from the seeds.

Analysis: can UN deliver on COP19 loss and damage agreement?

Yeb Sano, the Climate Commissioner in the Philippines, told RTCC that, in an area so heavily dependent upon agriculture, providing the capital to enable people to rebuild their farms was the best deployment of financial aid.

“Being in the part of the year where we do not expect any major storms, this came at a time where the harvest have been affected profoundly,” he said.

In two regions of the Visayas, where the first stock of seeds is being distributed, 74% of farmers reported losing their standing crops, while another region lost up to 63,234 hectares of its rice crop.

Oxfam International is also distributing 400 tonnes of rice seeds across six municipalities south of Tacloban this week. They have chosen a ‘climate-proof’ variety, purchased in Luzon island, that are suitable for the low lying area and are not dependent upon large amounts of artificial fertiliser or pesticides.

Seed donations have come in from Belgium, Switzerland, Italy, Ireland, Norway, the UK, and the general public. The UN’s Central Emergency Response Fund and the FAO have also contributed.

Altogether, this is enough to allow almost 55,000ha to be sown with rice over the December/January planting season, with a further 8,332ha to be planted around the beginning of February.

“Because we are able to get farmers the seeds and inputs they need in time, they will be able to produce at least 2 tonnes of rice in the March/April harvest, enough rice to feed a family of five for a year, and generate vital income from surplus,” Hiroyuki Konuma, Regional Representative of FAO for the Asia-Pacific Region.

Rebuilding livelihoods is a vital part of the reconstruction process throughout the Philippines. Without this, rural areas face long term challenges even after the debris has been cleared, Sven Harmeling, a climate change expert at CARE International, told RTCC.

“They’re losing their harvest in addition to losing a wealth of material belongings, and that’s a situation which can run such areas into more permanent poverty.”