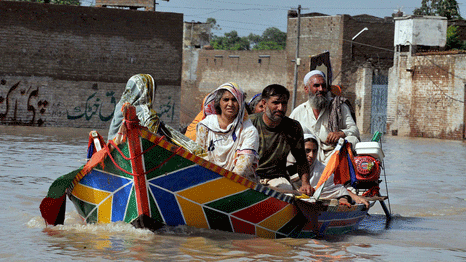 Next week, hordes of negotiators will flood into Warsaw to discuss how to reduce the world’s emissions in time to avoid catastrophic climate change.

If you find yourself wanting to engineer a scene of excruciating awkwardness between the two, the best advice RTCC can offer is to bring up the subject of loss and damage.

It is a topic that is practically guaranteed to get negotiators avoiding eye contact with one another. But that doesn’t mean that they will be able to avoid talking about it.

They will have to – an agreement, hastily signed off at five minutes to midnight during last year’s climate talks in Doha, means that loss and damage is set to provide one of the main sticking points at this year’s conference.

RTCC understands the world’s Least Developed Countries are planning to submit a new proposal linked to climate compensation at the start of the COP19 summit in Warsaw.

Even if the world decided to stop emitting all greenhouse gases tomorrow, some of the effects of climate change would still be unavoidable.

Carbon dioxide has a long lifespan, lingering in the atmosphere for centuries after it has been emitted. “Further near-term warming from past emissions is unavoidable,” concluded the UN’s climate change panel in September.

The idea behind loss and damage is simple. The rich countries who have historical responsibility for climate change should pay compensation to the poor countries who are now certain to feel the effects.

In Doha, negotiators decided that they would establish some sort of mechanism to deal with the issue of loss and damage at the talks that are taking place in Warsaw next week.

This is something of a turnaround on how UN negotiations normally take place, says Saleem Huq, a senior fellow at the International Institute for Environment and Development, with the most vulnerable countries left to respond to other countries’ proposals.

He hopes that the discussions will be less contentious this time round, now that the countries who would become liable for payments have had a chance to get their heads around the concept. He adds that even establishing a pathway for developing a mechanism is something of a victory.

“What happened in Doha was they didn’t want to talk about this at all… They lost that battle, so we now have a track of negotiations on loss and damage, which they tried to close down but weren’t able to,” he says.

“We hope there will be some movement on this, but it’s difficult to predict what will happen. But the issue is whether or not we get an international mechanism. Developing countries are asking for that, but developed countries are still dragging their feet.”

Dragging their feet is something of an understatement. At best, any new mechanism for discussing loss and damage will face intense scrutiny from developed countries, who will want to know exactly why such a mechanism is needed and what it would involve. At worst, they will face outright resistance to the proposal.

Already, the US has announced that it will not “accept the narrative of blame”, suggesting that it was more “ideological” than useful – perhaps so, if you are one of the countries that could face a massive bill as a result. The 2010 Pakistan floods, for instance, are estimated to have cost the country over $15bn.

“[I]t is unwarranted to assign blame to developed countries for emissions before the point at which people realized that those emissions caused harm to the climate system,” said US climate envoy Todd Stern, speaking at a climate conference at Chatham House last month.

It is an argument that is more likely to fly with developed countries than developing, and it remains on legally shaky ground.

Speaking to RTCC last year, former UN climate chief Michael Zammit Cutajar said: “When does responsibility for causing climate change start? A lawyer may tell you that ignorance of the harm you have been doing does not absolve you from answering for it.”

Other senior EU negotiators to whom RTCC has spoken have also suggested that loss and damage is an idea that will face fierce opposition when it comes to be discussed in Warsaw.

“As long as the issue of loss and damage is framed in that legal context, it’s a nonstarter.

“I understand all the historical reasons why people push for this. I’m just saying from a procedural point of view, from the point of view of tactics and negotiations, if we continue to frame the loss and damage issue within the traditional legal context we’re not going to be able to move.”

Whether the least developed countries will be able to persuade them otherwise at Warsaw next week will be one of the central challenges that they face.

What is certain is that, with so much at stake and such a clear narrative of winners and losers, loss and damage will be one of the more intriguing stories to unfold.