Should loss and damage calculations be based on post 1990 emissions?

Ignorance of the law is no defence.

It’s an old legal cliche, but one that could find itself central to discussions over the structure of a loss and damage mechanism proposed at the recent UN climate talks in Doha.

Speaking at the negotiations, UK Energy and Climate Minister Greg Barker appeared to suggest that countries who had released substantial amounts of CO2 before the link between emissions and climate change became clear in the 1990s, had done so unaware of the impact their actions might have.

“I think it’s one thing to emit unknowingly, it’s quite another to emit when you know the damage is being done by the actions you are undertaking”. 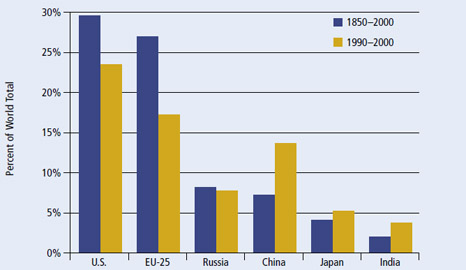 Since this chart was published by the World Resources Institute in 2000 China’s emissions have rocketed by 171%, while India has risen to third based on national statistics

His comments came before the conference agreed to explore options for a loss and damage mechanism, but they reveal one line of argument ‘developed’ countries may employ when questions over compensation levels are raised in the coming year.

If emissions over the past two decades were taken into account when calculating who is ‘responsible’, China, India, Brazil and perhaps South Africa could all be expected to make increasingly large contributions to a compensation fund.

Speaking to RTCC, former UN climate chief Michael Zammit Cutajar said Barker’s comments raised an interesting question over liability, but were unlikely to gain much support across all parties.

“When does responsibility for causing climate change start? A lawyer may tell you that ignorance of the harm you have been doing does not absolve you from answering for it,” he said.

“A moral philosopher may say that you cannot reject responsibility for the sins of your ancestors. A politician, however, may be attracted by the argument that responsibility should date from the adoption (1992) or entry into force (1994) of the Convention.

“That would be a simple rule of thumb and politicians like simplicity. But it would favour developed countries by downplaying 150 years or more of history. And that would open it to attack.”

The question of compensation for climate induced events has hung over the climate talks since they started in 1992. Zammit Cutajar recalls that lawyers for the Alliance of Small Island States (AOSIS) tried to introduce the concept of liability into the foundations of the UN climate talks.

“Many AOSIS delegations included “imported” lawyers and the lead negotiator for the country chairing AOSIS, Vanuatu, was a lawyer from the Bronx, NY,” he said.

“I imagine that his exposure to the culture of litigation in the USA encouraged him in the quest to establish liability. But he was faced with strong opposition, not least from the USA itself. The concept did not carry into the Convention.”

While the industrialised world largely accepts some responsibility for the levels of Co2 in the atmosphere, squeezing a comparable level of finance or emission reduction pledges from those countries has proved problematic.

Saleemul Huq from the International Institute for the Environment and Development (IIED) told RTCC that the Doha agreement could prove a game-changer in this regard.

“My own view is that Doha marks the third era of climate change, the first era being the first decade of mitigation being the solution, and we put all our efforts with Kyoto, then realising mitigation wasn’t going to be enough and we need adaptation, so we’ve had a decade of that,” he said.

“Now we realise neither of those are working and we have to deal with some residual damage, and loss and damage is that new issue, and the Framework Convention is not geared to dealing with the problem after it has occurred. The Convention’s task is to prevent the problem. We’ve failed to prevent it, so the Convention has to decide what we do with that failure.”

Recent scientific projections have helped force this issue onto the agenda.

No sooner had the World Bank reported in November that the world is on course for a 4°C rise, the UN Environment Programme revealed global carbon emissions are out of control and need massive cuts simply to avoid a 2°C rise.

The World Bank report could come straight from JG Ballard’s novel The Drowned World. A 4°C leap would lead to an 150% increase in ocean acidity, sea level rises of 0.5-1m and heat waves of “unprecedented magnitude and duration”.

Even in a world 2.2-3.2°C warmer the production of wheat, maize and soybean could also be set back by up to 30% without effective adaptation measures, illustrating how this could affect global food supplies and prices.

“Africa has not been very vocal so far, but they will suffer losses particularly in agriculture which will affect food security,” he said. “These countries are realising for them it’s important to put pressure on the system to get more support for loss and damage.”

He added: “The push on loss and damage is going to push up ambition and adaptation, and if that happens I will be the happiest person.” 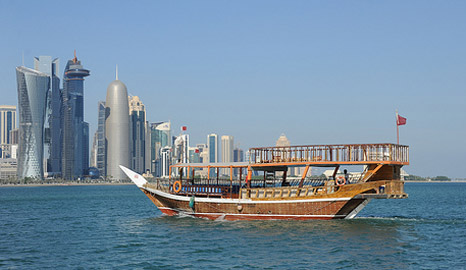 COP18 hosts Qatar boasts the highest per capita carbon emissions on the planet – should that make it liable to pay most for the effects of climate change?

The USA is currently in line to foot the largest bill if this became a simple compensation issue, but it seems unlikely Congress or the Senate would ratify a treaty allowing it to be liable for extreme weather events around the world.

UK Energy and Climate Secretary of State Ed Davey says it is “too early” to talk about the levels of money that could be offered as compensation: “We should be cautious about saying we are liable for some particular event or some particular change, but that does not mean that we shouldn’t work with others to try and help some of the poorest people in our world adapt to the impact of climate change”.

Technical work on the mechanism will start in the new year. The word compensation is unlikely to figure, but there will be a specific focus on how to value non-economic losses. For instance, extreme weather events in poorer parts of the world often have a smaller financial bill, but far higher costs in terms of human lives.

While national laws are often enough to hold polluters accountable for their actions, an international mechanism would herald a shift in the balance of power between rich and poor.

Louise Kulbicki works with environmental lawyer Polly Higgins on her campaign to promote a law against ecocide. She told RTCC that the COP18 decision was positive, but warns that it will take too long to be really effective.

“Progress is slow at the COPs and an effective enforcement mechanism is not in place to deal with damage and loss,” she said. “A Law of Ecocide would ensure that countries who face Ecocide as a result of rising sea levels and climate change would be given assistance from other States.”

Whatever law or mechanism is put forward, Saleemul Huq warns it will face stiff opposition from those expected to pick up the bill, and despite optimism post Doha, he does not expect this track of negotiations to make much progress in the coming 12 months.

“The reluctance to open this track and keep it going has been that it opens the door to discussion on compensation. Loss and damage is an accepted euphemism for that,” he said.

“But there is still a lot of technical work that needs to be done, exactly what is loss and damage, how do we measure and attribute it, so there is still a long way to go before questions of genuine compensation will arise, but it does open the door, and that’s why some want to close the door.”