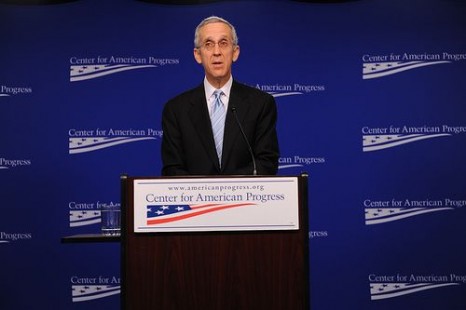 The USA’s chief climate diplomat has warned the chances of an effective emissions reduction deal in 2015 could vanish unless some countries drop their calls for a ‘rigid’ legally binding treaty.

Speaking at Chatham House, Todd Stern said negotiators must “keep our eyes on the prize”, arguing that the final agreement needed to be flexible, with pledges rooted in domestic ambition, if a durable and effective agreement was to be achieved.

And in a speech that gave the clearest indication to date of how the US thinks an agreement could work, Stern also underlined the USA’s long-term hostility towards tough new UN regulations.

“We will need to be creative and flexible as we think about the legal character of the agreement,” he said. “Again, rigidity is a potential roadblock.”

He added: “The most important drivers of climate action are countries acting at home.”

All 194 countries of the UN will come together in Paris in 2015 to decide on how the world can avoid a pathway leading to 2C warming – the temperature at which governments have decided will lead to unacceptable levels of risk.

There is an understanding among the countries that this agreement must be legally binding in some way, but there is no consensus on what exactly this will mean in the final deal.

One of the main targets for next month’s UN climate summit in Warsaw will be to establish when countries have to submit their final emission reduction and financial pledges.

This could be as soon as next September, when Ban Ki-moon hosts a high-level leaders meeting on climate change in New York.

Small Island States at acute risk from rising sea levels and the 49-strong Least Developed Countries group are strong supporters of tough and binding mitigation targets, which they say are vital to ensure climate change does not spin out of control.

Stern explicitly rejected this argument, suggesting that a flexible final agreement would lead to a stronger overall package.

He argued that a new climate policy system must be driven by “norms and expectations”, which countries adopt to enhance standing and reputation, rather than “rigid rules”, which he suggests would depress ambition.

“There is certainly a role for rules, standards and obligations in this agreement,” he said.

“But an agreement that is animated by the progressive development of norms and expectations rather than by the hard edge of law, compliance and penalty has a much better chance of working, being effective and building inclusive, real world ambition.”

Stern, who is close to Secretary of State John Kerry and President Barack Obama, also appeared to subtly head off calls for climate compensation, and rejected what he labelled a “narrative of blame” laid at the feet of developed nations.

The Least Developed Countries group is widely expected to present a new ‘loss and damage’ proposal at the UN talks in Warsaw, potentially leaving the USA and other rich nations with a huge repaid bill for climate-related destruction.

Stern contended that the idea of “common but differentiated responsibilities”, which sets out the principle that targets for each country must take into account their individual capacity, is one that has “come to embody an ideological narrative of fault and blame, but it also serves a more pragmatic purpose.

“It is seen as the principle that shields developing countries from climate requirements they fear could constrain their capacity to grow, develop and alleviate poverty.”

The flexibility comes in designing an agreement that responds to changing responsibilities, he said, rather than rigid categorisation of countries into Annex 1 and Annex 2, with a different set of rules applied to each, as dictated by the Kyoto Protocol, which the US refused to ratify.

He added that the UN needs to decide whether the final deal will be “a single operational system differentiated across the spectrum of countries” or based on two different systems – “one for developed countries, one for developing.”

In a nod to China and other emerging economies, Stern announced that the second scenario would be “unacceptable” to the US, and would be viewed as “inimical to ambition”.

He added that “lectures about compensation, reparations and the like will produce nothing but antipathy among developed country policy makers and their publics.”