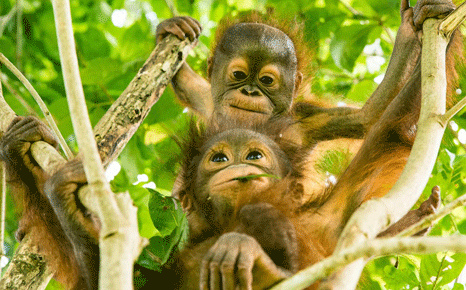 HSBC is financing the destruction of forests crucial to the survival of endangered species and the fight against climate change, says new research.

The world’s third largest bank is the subject of a report by the London-based Environmental Investigation Agency (EIA), which says that despite adopting polices to keep it from financing deforestation HSBC has provided assistance to unsustainable palm oil developers.

The report calls for HSBC to immediately engage with the developers to ensure no further clearance occurs prior to undertaking assessments to find out whether the environment will be endangered.

According to the Global Witness NGO, less than 5% of the rainforests in the state of Sarawak on Borneo remain untouched, thanks to finance from HSBC.

EIA forests campaigner Jago Wadley said HSBC’s 60 million customers around the world would be “appalled” to learn it is profiting from large-scale deforestation even as it projects a wholesome public image of sustainability.

“HSBC is one of the world’s largest banks and is a key player in the plantation sector,” said Wadley. “It now has a clear choice between choosing to be a force for good or to carry on hiding behind a fig leaf of sustainability while making huge profits from deforestation.”

The report says that rather than maintaining its own watch on the businesses it funds, HSBC is delegating responsibility of ensuring companies stick to the bank’s principles to the Roundtable on Sustainable Palm Oil (RSPO), which promotes the sustainable use of palm oil found in biofuel, confectionary and cosmetics.

Wadley said: “In our experience, the RSPO lacks credible mechanisms to ensure its members protect High Conservation Value forests, and even when such violations are brought to its attention its measures are insufficient to either compensate for the damage or serve as a disincentive.”

A report in the Guardian earlier this week revealed sixteen palm oil concessions in Indonesia, Liberia, the Philippines, Malaysia, Democratic Republic of the Congo and Cameroon operated by members of the RSPO were implicated in land grabs, human right abuses and deforestation.

According to campaign group World Development Movement, UK banks have lent more money to Indonesian coal than banks from any other country since 2009. HSBC, Barclays, Standard Chartered, Royal Bank of Scotland (RBS) and Lloyds were said to have provided £170 billion to fossil fuel projects.

HSBC is performing well in other sectors including topping rankings of its carbon performance compared to other FTSE 100 companies.

But they WDM claims these carbon rankings are misleading because they do not take into account CO2 emitted from fossil fuel projects the companies finance.

For example, RBS’ loans to coal, oil and gas companies means its carbon emissions are up to 1,200 times higher than the figure reported by the bank, which is 18 times the total emissions of Scotland.

In response to the report, HSBC told RTCC: “We were one of the first banks to introduce a forestry policy, which states that we will not finance the conversion of High Conservation Value [HCV] Forest for plantations and, in the case of palm oil, we have a preference for clients who seek certification under the RSPO certification scheme.

“Where clients cannot show clear evidence of progress towards meeting our sustainability policies, we stop providing banking services to them.”

In the first of two case studies, the report documents how RSPO member Bumitama Agri forged ahead with rainforest clearance even though it did not have the required HCV assessment.

HSBC is said to have provided $419 million in loans and financial services to the company since 2010.

According to the report, neither the RSPO nor HSBC were aware of this destruction until it was brought to their attention by NGOs working on the ground.

As recently as February this year, rescuers were removing endangered orangutans threatened with starvation from the barren, deforested land – land which their presence automatically qualified as a highly biodiverse area.

“The bank should also update its forest policy to forbid the financing of deforestation or exploitation of peatlands; should institute a process of due diligence prior to financing any land expansion, directly or indirectly; and should use its position as a member of the RSPO Executive to institute regular and formal, but independent, monitoring,” said the report.

HSBC – Banking on Extinction from EIA on Vimeo.