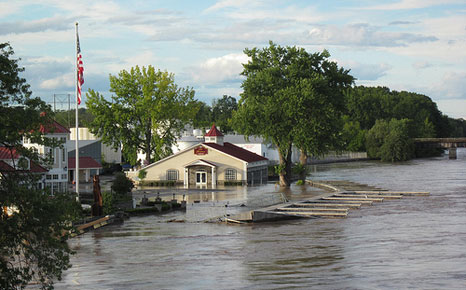 Asia’s major cities are likely to be the hardest hit by natural catastrophes, both in terms of absolute numbers of lives lost and economic impact, advises a new report.

Reinsurance company Swiss Re indicates India and China, in particular, as facing a significant threat from river flooding, highlighting the urgent need for decisive climate action from city leaders.

The 616 urban areas examined in the study looked at are home to about 1.7 billion people, roughly 25% of the world’s total population, covering $34,000 billion or about 50% of the global GDP.

With 12 million residents potentially affected, the cities based around China’s Pearl River Delta are the most flood-exposed urban areas in the world.

In terms of lives lost, not a single European city features among the 20 most potentially affected urban populations. Instead they face economic challenges linked to climatic changes.

The study is a basis for decision-makers, as well as the insurance industry and the broader public to promote dialogue on urban resilience.

“Already today, major river floods alone have the potential to affect 380 million people living in cities; and some 280 million people could be impacted by severe earthquakes,” says Matthias Weber, chief underwriting officer at Swiss Re.

“We need to better understand what makes cities more resilient and what decisions about investments and infrastructure are needed to minimise the loss of life, property and economic production.”

The UK has asked engineers to develop plans to protect London and £200 billion-worth of property from flooding until the end of the century.

Following the devastating effects of Hurricane Sandy New York City Mayor Michael Bloomberg in June called for the reshaping of New York City’s 520 miles of coastline with storm barriers, flood walls, levies and sand dunes, as part of a $20 billion plan to strengthen the city’s defences against climate change.

This investment is not always matched in the developing world. India and Pakistan were recently criticised for allowing the construction of housing on flood plains.

The UN expects 6.3 billion people, or 68% of the world’s population, to be living in urban areas by 2050. Growing populations, and the value of infrastructure also increase potential losses in these urban areas.

Next week during the opening ceremony of Climate Week NYC 2013, reflecting one year on from Hurricane Sandy, Swiss Re and The Climate Group will host an event to explore how government officials and local residents can make cities more resilient to climate impacts in the future.

The session will explore efforts taken by governments, businesses and civil society over the past year to build more climate resilient communities.

It will also identify additional measures that are needed going forward, emphasizing solutions that provide the greatest economic and social benefits.