The European Parliament has narrowly passed reforms to the EU carbon market.

Amended changes agreed by the environment committee last month were passed with 344 in favour and 311 against.

The changes include a condition that the intervention will be a one-time event and a reduction in the number of withheld credits to 900m from the initial suggestion of 940m.

It is hoped that holding back the allowances, known as ‘backloading’, will limit supply and lift the price toward a level that might stimulate CO2 reductions. 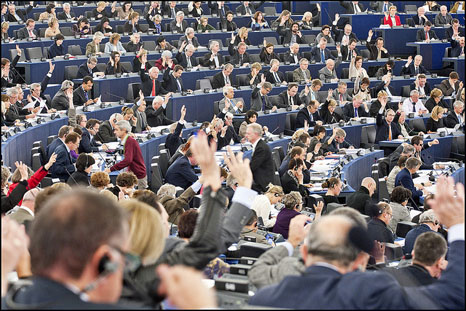 The vote in Strasbourg was the second attempt to pass backloading proposals (Source: Flickr/European Parliament)

The previous proposal was narrowly rejected by 334-319.

The price of carbon in the EU has hit record lows this year due to an oversupply of credits.

This has been caused in part by the recession as the resultant decrease in industrial output also meant less emissions. Lower than hoped carbon reduction targets in the EU also means the cap on emissions has been set too high.

#backloading passed. COM is forced to prepare sectoral impact assessment before implementation. Much activity and for all the bad reasons.

The plans must now be passed by the European Council which allocates weighted votes to each of the EU member states.

If the 12 countries that have signed up to a UK call for yet greater changes to the system provide their support for backloading, 180 of the 260 votes required will be guaranteed.

The proposal by the UK and back by France, Italy and Germany calls for deeper structural changes to boost the effectiveness of the Emissions Trading Scheme (ETS) in the longer term.

Backloading is viewed as a quick fix and the European Commission is now charged with developing these larger reforms. Davey and his supporting European peers want those plans ready by the end of this year.

“This is a positive outcome after months of uncertainty. All eyes are now on Member States to reach a position as soon as possible,” he said.

“Once a backloading decision is agreed, this must act as a stepping stone to deeper structural reforms of the EU ETS that restore the balance of supply and demand in the carbon market and prevent the ETS from compromising the environmental effectiveness of other climate policies.”

The Climate Markets and Investment Association (CMIA), which represents KPMG, Deutsche Bank, Bank of America among others, welcomed the decision.

“This is a great result albeit after a second bite at the cherry. This positive vote now gives the EU ETS breathing space for more profound supply side reforms to be enacted that will prevent the need for another backloading debate in the future,” said Miles Austin, executive director, CMIA.

Despite the changes, analysts fear the changes will be insufficient to raise the cost of emitting a tonne of carbon.

“The Parliament has voted to backload 900 million allowances under stricter conditions than the initial proposal, but the surplus of permits is around 2 billion at present,” said Zoe Grainge,a senior analyst at IHS.

“The backloading might therefore have limited impact on the price of carbon. Also, these proposals now need to be passed into law by the Council, and Poland has already said it would oppose any measure to increase the price of carbon. The way to ensure the EU ETS remains a key policy tool for the mitigation of climate change is longer term structural reform, and at present there is no clarity on how the market will work post-2020.”