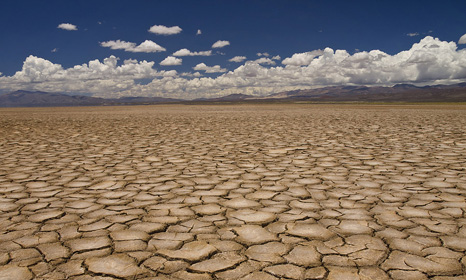 Climate adaptation is to become the main focus of the UN body tasked with addressing land degradation, according to its new chief.

Speaking in Windhoek at the end of the UNCCD’s bi-annual summit, Monique Barbut said she would direct her energies to achieving a successful global climate change deal in two years.

“This convention should benefit from the 2015 climate change conference,” she said.

“I really would like in particular that this Convention focus on a certain number of indicators on adaptation to climate change, that we would want to bring to the UNFCCC [climate convention] to be integrated to all future development.”

The move is likely to be welcomed by critics who feel the UNCCD and its sister conventions focusing on biodiversity and climate change have failed to work together since their inception in 1992.

While the fierce politics surrounding global warming and the protection of iconic species guarantee high levels of media coverage, land degradation has frequently been ignored.

A consequence of poor farming techniques, over grazing and climate related impacts, the erosion of fertile soils is likely to have increasingly serious impacts around the world.

It has especially harsh consequences in poorer nations which lack the capacity to restore ecosystems, or to deal with drought.

According to the UK Met Office, human influenced climate change contributed to the causes of the 2011 East Africa drought, which left over 100,000 dead and millions close to starvation.

The world’s soils also play a huge role in mitigating the consequences of climate change. They are estimated to store 2500 Gigatonnes of carbon, but as much as 1% of the planet’s fertile soils disappear on an annual basis.

And according to the UN, land use change such as deforestation contribute about one third of the total greenhouse gas (GHG) emissions.

An EU-funded report released in Windhoek warned land degradation has an annual cost of US$40 billion, underlining the hitherto hidden impact of this problem.

At the Rio+20 summit countries agreed this issue posed increasingly severe challenges to African nations and other ‘Least Developed Countries’, recognizing the need “for urgent action to reverse land degradation”.

Despite featuring on the agenda, the Windhoek meeting ended with no clear agreement on how this can be taken forward, although countries did commit to ‘develop options that parties may consider to strive to achieve land-degradation neutrality’.

Longer term funding and a mechanism to enable scientists to outline findings to policymakers were signed off, but many believe the UNCCD now has to step up to a new level if it is to survive.

“We have our concerns in the EU that this Convention does not get the attention, resources and mandate that it deserves, and we are here to make this Convention more relevant,” the EU head of delegation Timo Makela told RTCC.

“This Convention needs to take a role in leading policies within its scope…and we are willing to look at the scope of this convention.”

Clare Short, a former UK Secretary of State for International Development believes the forthcoming Sustainable Development Goals (SDGs) will be key in this regard.

Set to be agreed in 2015, they are likely to set the tone for investment decisions up to 2030.

“Land Degradation must be in there, either as a goal in itself or under one of the targets – combating hunger, looking after water,” she told RTCC. “I believe if it’s in there it will drive implementation of the lessons learnt.”

Barbut insists she is not obsessed about developing new protocols or conventions, claiming that “no-one is in favour” of them, but admits 2015 will be a test of how far the UNCCD has come.

A set of indicators that will enable countries to report how much of their land is degraded (or restored) is also in the pipeline, but one EU diplomat told me it was unlikely they would be ready before 2015.

For Barbut, the task is to reinvigorate and refocus her team for a challenge she says is close to her heart.

“For me this convention is certainly the closest to questions of food security, human respect, migration, peace and security. Maybe it will be important to outline those aspects in the future.”

And as for her plans to become the UN’s new climate adaptation body, she already has a plan, involving no little sweat and pain.

“I am already decided I will be running every morning in Bonn with Christiana Figueres, so that helps”.