Man-made climate change contributed to the causes of the 2011 East Africa drought, although it is currently impossible to gauge by how much.

That’s the finding of a new report from scientists at the UK’s Met Office, which has calculated that the failure of rainy seasons preceding the drought was influenced by humans.

“We found that the particularly dry short rains in 2010 were most likely caused by natural variability,” explained Dr Fraser Lott, an Attribution Scientist at the Met Office.

“However, the chances of long rains as dry, or drier, as those of 2011 were found to have increased due to human influence.” 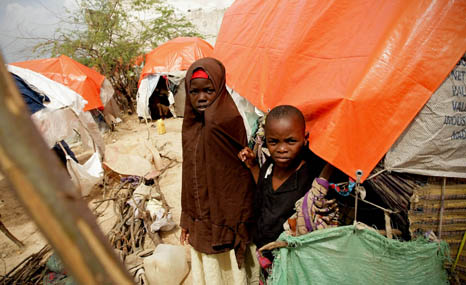 At the drought’s peak the UN classified areas of Somalia, Ethiopia, Djibouti and Kenya as a crisis or an emergency (PIC: UN photos)

Aid agencies estimate that up to 100,000 people died and millions more required emergency food during what the UN labelled the worst drought in 60 years.

The exact links between climate change, natural disasters and conflict are not clear – but experts agree they make countries far less resilient to extreme weather events.

The UK-based Overseas Development Institute estimates that between 2005-2009, more than 50% of people affected by ‘natural’ disasters lived in fragile and conflict-affected states.

The Met Office study analysed how likely the weather patterns that led to the drought were, using modelling techniques to predict how a world without higher levels of greenhouse gases would behave.

Researchers say that initial evidence suggests humans are to blame for between 24-99% of the increased risk of dry conditions witnessed in 2011.

Dr Peter Stott, Head of Climate Monitoring and Attribution at the Met Office and co-author of the paper says scientists are becoming better at linking individual events with levels of Co2 in the atmosphere.

“It is rarely possible to declare that an event is entirely caused by anthropogenic climate change and would have been impossible without it,” he said.

“This study shows that both natural causes and human influence combined to cause the East Africa Drought.

“In this case, while we know human influence played a role there is considerable uncertainty about just how significant this was, highlighting the complexity of attribution.”

At the last round of UN climate talks developing countries pushed for a ‘loss and damage‘ mechanism to compensate them financially for extreme weather events.

As scientists become better at attributing individual events to man-made climate change these demands are likely to get louder, potentially leaving richer nations to foot the bill for future natural disasters.