Former presidents, academics and scientists have come together to issue declaration for action on climate justice 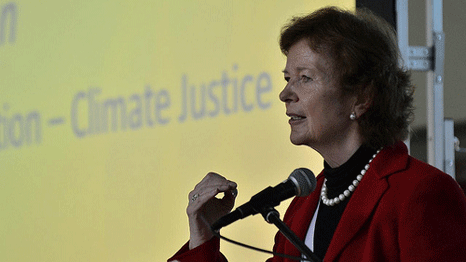 Declaration is a collaboration between the Mary Robinson Foundation and the World Resources Institute (Pic: Flickr / CIAT International Center for Tropical Agriculture)

A collection of leading thinkers on climate have launched a declaration today, intending to spur action towards the creation of an ambitious international agreement in 2015.

Representatives from politics, science, business, civil society and academia have come together under the auspices of the World Resources Institute (WRI) and the Mary Robinson Foundation – Climate Justice (MRFCJ) to write the Declaration.

Signatories to the declaration include the the former Prime Minister of Mozambique Luisa Dias Diogo and former President of Chile Ricardo Lagos. Mary Robinson, former president of Ireland, and Andrew Steer, President of the WRI, have also put their names to the document.

All are members of a High Level Advisory Committee, assembled by the MRFCJ and the WRI, to stimulate an influential dialogue on the issue of climate justice.

“The time for radical leadership on climate change is now. With 2015 set as the deadline for both a new climate agreement and the post-2015 development agenda, we are at the point in human development when we need to act to protect,” said Mary Robinson.

“The rights of the most vulnerable in society are already undermined by climate change and this injustice must be addressed now. Equally for the sake of generations to come, it is our duty, as citizens of the world, to realise a new model of sustainable growth and development that is supported by strong legal frameworks.”

The report comes at a busy time in the climate change calendar, with the Intergovernmental Panel on Climate Change due to publish their potentially game-changing report at the end of this week. The UN General Assembly is also currently taking place in New York, where Ban Ki-moon is to call leaders to come together for a high level climate change summit in 2014.

In six weeks’ time, the UN climate change body will meet in Poland to attempt to make headway on setting up a framework in which a legally binding global agreement can be met in Paris in 2015.