How scientists at NOAA are mapping New York’s watery future 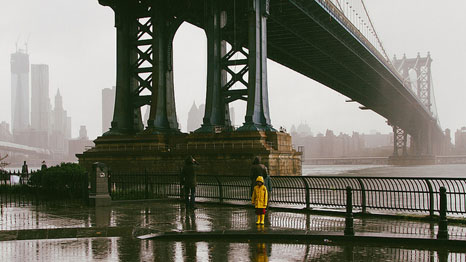 When Hurricane Sandy hit last October, it was a moment of reality for the inhabitants of New York: the city was woefully ill-equipped to deal with the sea levels that, for the past 100 years, had been rising up the waterfront.

Although the sea around it has risen over a foot since 1900, the maps which set out the flooding risks had not been meaningfully updated since 1983. They failed to take into account the waterfront developments that had taken place in the intervening decades. When Sandy hit, the areas that flooded were more than one and a half times larger than the 100-year floodplain defined on the maps.

With sea levels predicted to continue to rise, updating these maps to reflect the present day floodplain is not enough. In the wake of the damage caused by Hurricane Sandy, New York has the opportunity to redevelop its waterfront as a resilient community. It needs to consider a future where sea level rise is an immediate and worsening problem.

And it’s not 1800 anymore – if New York is going to respond to this opportunity, then it has to approach it with a set of maps that acknowledge that the oceans are no longer stable as they had been for the 4000 years prior to the 20th century. This is the opinion of Doug Marcy, a coastal hazards specialist at the National Oceanic and Atmospheric Administration (NOAA).

He told RTCC, “The sea level has started to rise since the late 1800s, early 1900s. All the development that has occurred on the coast has assumed that it’s going to stay static, and now that it’s projected it’s going to rise, we have significant challenges.

“We didn’t design structures to be able to deal with it, and it’s not just from storms, but from everyday tidal flooding. It’s causing a re-evaluation of our infrastructure.”

Adapting for the future

Doug, along with others from the Federal Emergency Management Agency and the US Army Corps of Engineers, have been putting together a set of maps which will allow anyone involved in designing the future New York to plan for a potentially watery future.

Using the best available flood hazard data along with information on future sea level rise from two peer-reviewed sources, the team has compiled an interactive tool that allows planners to judge where development should take place and the level to which buildings should be elevated based upon various flooding scenarios up until 2100.

Elevation matters when it comes to designing a flood sensitive city. When the Rockaways, a peninsula of Long Island, lay in ruins in the aftermath of Hurricane Sandy, there was one stalwart survivor: a new oceanfront housing development called Arverne by the Sea.

While planning the development, the developer had made sure to elevate the homes, along with laying out dunes in front of the houses, which absorbed the waves which had so successfully flattened everything else.

The site’s elevation and this unique drainage system kept water out of the homes, undoubtedly saving property and quite possibly lives.

This is the sort of adaptive measure that planners should be integrating into future designs for the city, but it is impossible to do so if the maps only take into account the existing flood risk.

The floodplain of the future

The new maps take into account what New York’s flood plain will look like not only at different points of the future, but also according to various different climate change scenarios, based on various levels of optimism.

The upper range assumes a fierce progression of climate change and factors in the melting of the ice sheets, whereas the lower, more optimistic ranges are based upon a sea level rise caused primarily by warming oceans.

No scenario is given a particular level of probability – although the recent leaked draft of the latest IPCC report indicates that, by 2100, we could be seeing three feet of sea level rise – but these different ranges are useful in planning for the various levels of risk tolerance for a project.

“The mapping shows the potential expansion of the flood plain, so they say, ‘Okay, you’re not in a flood plain now, but you might be.’

“So for planning purposes, communities can look at areas outside the flood plain and see there’s still risk there and that they still might be impacted, so maybe they should go above and beyond in adapting their houses.”

The team at NOAA has also developed a calculator as part of their flood resiliency package. Harnessing tools already in use by the US Army Corps of Engineers, they plugged in the data on rising sea levels so that planners can compute the optimum level of elevation in each area.

“Now at any given location not only have you got a map, but you can also type in the base flood elevation on your area and it will tell you how many feet you should add to that, if you’re going to take into account sea level rise depending on the scenarios,” explains Doug.

Although the maps do not yet have any regulatory impact, they provide data on the kind of flood planning that state planning departments are beginning to take more seriously. There will always be those who object to the potential implications of higher flood insurance policies for those who suddenly find themselves living in a future floodplain, but despite this Doug affirms that the maps have been “well received”.

He says, “We’re seeing more and more states take sea level rise into account in planning procedures, even without a federal mandate to do it.

“In New York, we worked very closely in the creation of this product after Sandy with the mayor’s office, so we’re definitely planning on using this information when it comes to designing new infrastructure and making the city more resilient.”

He adds that, in the end, whether or not it leads to higher insurance, adapting your house to extreme storms if you live in a flooding prone area is a smart thing to do – and most people are beginning to realise this, not just in New York but across the US. The scientists are now working on an equivalent project for San Francisco, and in a year or so will take it to Tampa, Florida.

“There’s always debate over climate change, but I think people are starting to realise that it doesn’t really matter if man’s causing global warming: if sea levels are rising that’s something we’re going to have to deal with.

“I think it took hitting an area that has such a high population for us to realise. You see it over and over again on the news – they’re calling it the new normal. The new normal is we’re going to start seeing more of these kinds of events; we are going to start having hotter weather and more extreme precipitation.

“It’s becoming more accepted and I think people are starting to accept it more.”