Are developing nations equally to blame for climate change? 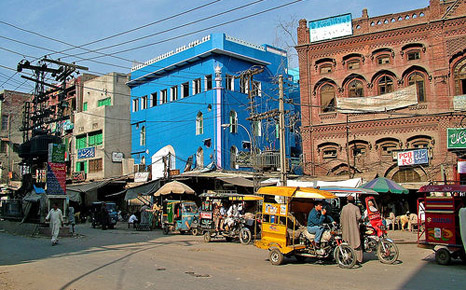 Should Pakistan shoulder as much of the burden of addressing rising carbon emissions as the UK or USA? (Pic: Flickr)

European researchers say both the developed and the developing worlds may be almost equally responsible for contributing to climate change.

Their analysis goes to the heart of one of the most contested issues obstructing international negotiations for an effective agreement on cutting greenhouse gases (GHGs).

The developed world argues cuts should be based – in the long term, at least – on current GHG emissions; this means heavily polluting countries like China and India will have to make stringent GHG cuts.

Developing countries have a very different viewpoint: they say climate change results from the cumulative build-up of GHGs in the atmosphere over time, rather than from emissions in any one year. So, they argue, it should be the developed world that makes the biggest GHG cuts.

Writing in the journal Climatic Change the researchers say that deciding which countries have contributed most to climate change depends on how you calculate both historic and current emissions. They take a middle course.

At one extreme, they calculate the relative contribution of developed countries as a group at 80% of the total warming the Earth has experienced so far. However, this figure falls to 48% when other factors are taken into account.

The researchers have used what they call a reference case, which puts the share of responsibility of the developed world at 52%. They say they have laid out the options available without trying to judge which provides the most objective answer, and that all the options are equally valid.

New features in their analysis, they say, include allowing for historical emissions (which they define as those occurring between 2000 and 2010), but discounting other emissions to account for technological progress.

The study says: “Calculating countries’ contributions to climate change based on their cumulative historical emissions does not take into account technological progress.

“In the past, developed countries used high-emission technologies because no better technologies were available – for example, the UK has a long history of high emissions due to the use of inefficient steam engines.”

Today, it says, with emissions for industrialised products like steel and cement much lower than in the past, some argue that developing countries have a “late-comer’s advantage”, as they can use much more advanced technologies and emit less CO2 for the same level of output.

The researchers also deducted emissions for “basic needs” and included projected emissions up to 2020, based on countries’ unconditional reduction proposals for that year.

They make a distinction between countries’ contributions to climate change and their responsibility for it, which they suggest may be offset by emissions which governments have to make to satisfy people’s basic needs. These include uses such as cooking and heating, but not those which could be seen as luxuries.

They say countries’ contributions to climate change are most strongly determined by their emissions in the last four decades, so uncertainty about emissions before 1970 is of only minor importance.

At the end of the 20th century, with the developed countries the main contributors to the anthropogenic rise in GHGs, many developing countries argued that they should not be penalised for the rich world’s historical emissions.

But since then relative contributions to global warming have been changing fast, mainly because of the rapid rate at which emerging economies are industrialising.

The researchers conclude: “The results presented in this paper show the importance of the choices that can be made when calculating historical contributions of countries. Such choices have to be made by the policy-makers when negotiating a future international climate agreement.

“Providing the transparency in this paper on the implications of such choices is a first and necessary step to help governments to do so.”

Since the Rio Earth Summit in 1992 many governments have accepted the principle that they have “common but differentiated responsibilities” to protect the environment.

The principle is explicitly acknowledged in the preamble to the UN Framework Convention on Climate Change in 1992. The concrete implementation of this principle is a matter of debate since then. It is unclear whether the principle’s application might be affected by the findings of the study

Since the Rio Earth Summit in 1992 many governments have accepted the principle that they have “common but differentiated responsibilities” to protect the environment. The principle is explicitly acknowledged in the preamble to the UN Framework Convention on Climate Change, published in the same year.

The concrete implementation of this principle has remained a matter of debate since then. It is unclear whether its application might be affected by the findings of the study.