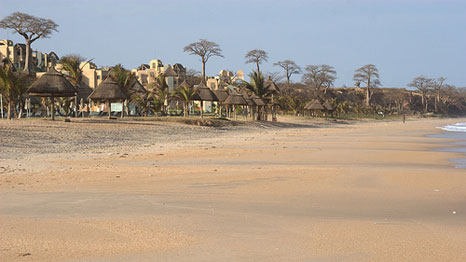 Talks on a global emissions reduction deal are set to resume in Warsaw this November, and Gaye says she is concerned at the lack of progress.

“Each time we are left alone, at the end of each COP, both developed and developing countries express the view that we are just coming here for nothing,” she told RTCC.

“This is a dilemma. We are never satisfied but we never give up.”

Nearly 50% of Gambia’s population are in poverty, according to World Bank data, which also reveals the country’s per capita carbon emissions are a miserly 0.3 metric tons per capita. In contrast Germany’s is 9.0.

The country’s annual GDP is just US$ 917.3 million, and funding for climate adaptation and mitigation projects is a particular concern for Gaye.

She is particularly frustrated by the lack of assistance for their National Adaptation Programme of Action (NAPA).

At the request of the UN, Gambia proposed a NAPA in 2007, identifying their most urgent and immediate needs, but some of them remain unfunded.

“They were designed to be immediate and urgent, but even between 2007 and now, some of them have not been implemented, so how urgent are they? These are the things that are frustrating in these situations,” she says.

Meanwhile, she says, climate related impacts in Gambia are worsening.

Last year, the country was forced to declare a drought, and the lingering effects of this mean that the country is not expecting a bumper crop this year.

Sea level rise is a threat to the capital, Banjul, with the greater part of the coastal city lying less than 1 metre above sea level.

With 17.9% of the GDP coming from tourism in 2008, the fact that 90% of the hotels lie along the threatened coastline could place added financial burden on the country.

“I would like to plead with our partners to act quickly to address the adverse impacts of climate change in our country,” adding: “These are real problems and a threat to Gambia. We require assistance.”

Equity – or who exactly should foot the bill when it comes to climate change adaptation and mitigation – is a key issue in negotiations, albeit a controversial one.

The UNFCCC defines equity as “common but differentiated responsibilities and respective capabilities”, but its precise definition remains under debate.

Various countries claim different levels of responsibility, based on whether they should be held to account on their historical level of accountability for the problem, or their current capability to remedy it.

“Our capabilities are limited to our vulnerability,” says Gaye. “The more vulnerable you are to climate change, then the less capable you are to responding to its adverse effects, so this is basically what we mean by fair and justifiable.”

“The developed world looks at it from another perspective: how much their economies can afford? For them they are saying ‘what can we do’? But for us, what ‘we can we do?’ is open – we see it as a loophole.”

Speaking from the sidelines of an ACT Alliance session to facilitate informal dialogue between governments, NGO and UN representatives on how to achieve a “fair and just” outcome to climate negotiations, Gaye told RTCC that the stagnating pace of the talks clashed with the urgent need to address climate change in her own country.

She said that while the provisions of the UNFCCC were useful in providing a strong agenda for climate action, countries needed to stop stating their position and start implementing real actions.

“Our position is based on the provisions of the convention, which is our guiding principle,” she said.

“These are provisions that have already been agreed to and we intend to work on that path and engage with our partners and explain to them – and continue to explain to them, because we’ve always been explaining to them – why we have these positions and why we need to pursue them.

“But the provisions have been there forever, and now we need to implement them.”