EU set for landmark vote on future of biofuels 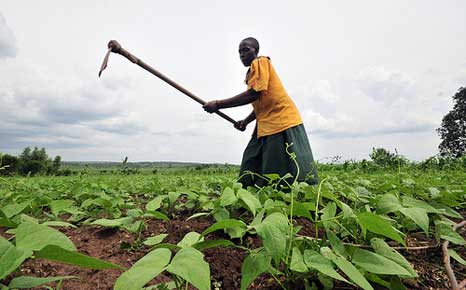 Some argue that land for biofuels takes up precious land for agriculture. (Pic: CIAT)

MEPs will vote today on whether to amend Europe’s biofuels legislation as part of plans to meet its 10% renewables target for transport.

There are concerns that the production of biofuels is leading to starvation in poor countries, driving up food prices and in some cases leading to a rise in carbon emissions.

In July the European Parliament’s Environment Committee (ENVI) backed measures setting a cap on biofuels made from food crops to 5.5%.

The industry wants this to be set at 6.5%, but amidst fierce lobbying, the Parliament will now have its say, followed by member states.

The committee is also asking for the inclusion of pollution from clearing areas like rainforests, or indirect land use change (ILUC) when calculating  carbon emissions savings offered by biofuels.

It wants ‘advanced biofuels’ – energy produced from other sources, such as seaweed or certain types of waste – to account for no less than 2% of energy consumption by 2020.

Why is this vote taking place?

In 2008 the EU decided that 10% of transport fuel by 2020 should be derived from renewable sources. At the time most of this had to come from sugar, cereals and oilseeds, often called first generation biofuels.

Studies since then have highlighted the potential environmental and human damage these can cause. This week Friends of the Earth issued a report warning that palm oil was now accounting for up to 20% of some biodiesels.

And in April 2013 the International Institute for Sustainable Development (IISD) warned the role of biofuels in guaranteeing EU energy security was not proven, and said subsidies were inefficient.

This rising tide of criticism and reports prompted MEPs to take another look at the biofuels policy.

For one, this is now big business. The IISD calculated that the annual value of the EU biofuel market was worth €13–16 billion in 2010-2011.

The industry has warned of plant closures and job losses if MEPs vote for a lower (5.5%) limit.

The area of European land used to grow energy crops to supply biofeedstock to biofuel refineries is larger than the area of Belgium and replaces the output of two or three large fossil-fuel refineries.

Critics say biofuels are driving fuel prices up. In April a report from the Chatham House think tank stated that biofuels could cost UK motorists about £460 million ($700 million) in the year ahead.

EU renewable energy targets could go up in smoke if the biofuels industry is dealt a blow.

A spokesperson for the Renewable Energy Association (REA) which represents the industry told RTCC that if the cap is too low it would adversely affect the EU’s decarbonisation target.

How does indirect land-use change fit in?

Development and environmental groups argue indirect land-use change (ILUC) has not been part of previous calculations relating to carbon emission savings from biofuels.

Specifically many are worried about the destruction of rainforests in Africa and Indonesia to grow palm oil.

A Greenpeace report, Certifying Destruction, used satellite imagery, government data, field investigations, and third party analysis to find that 300,000 hectares of forest were cleared for oil palm plantations between 2009 and 2011 in Indonesia.

The EU’s proposal on ILUC caused by biofuels aims to transition the industry from biofuels made from food crops to ‘advanced biofuels’ produced from other materials, like waste, algae and residues.

Advanced biofuels have the potential to achieve high carbon emission savings without posing significant threats to other environmental factors, but as a recent briefing from NGO Client Earth argues, not all of them are necessarily sustainable.

According to the Guardian, the UK Foreign Office is backing the 5.5% target as a result of concerns over ILUC.

The industry says the science surrounding ILUC is based on “unsound science and emotive NGO campaigning on food prices”.

The REA says not, pointing out that only 2% of global arable land is used for biofuels and the vast majority of EU biofuels feedstocks are crops grown in Europe.

“The European Commission estimates that bioethanol production constituted only 3% of total cereal use in 2010/2011,” says industry spokesperson Clare Wenner.

NGOs disagree. Oxfam says that if the land used to produce biofuels for the EU in 2008 had been used to produce wheat and maize instead, it could have fed 127 million people.

Actionaid’s recent report on Sierra Leone’s nascent biofuel industry says it has adversely affected the lives of 13,000 people in 60 villages.

Save the Children has called on governments to place a moratorium on biofuels expansion and to review current targets.

Does the EU need biofuels?

A report from Dutch research institute CE Delft recommended investment in energy efficiency, renewable electricity, and biofuels from from waste and residues as opposed to conventional biofuels.

It added: “the implementation of a 95 gCO 2 /km emissions standard by 2020 provides a cost-effective means of abating carbon dioxide (CO 2 ) compared to subsidizing the production and consumption of biofuel”.

But the industry seems in no doubt that it offers a clean and cost effective way for the EU to cut emissions.

A vote will take place on Wednesday in the Parliament, followed by negotiations between member states.

Countries with strong farming lobbies like France, Poland and Spain back higher targets, while the UK, Belgium and Netherlands prefer a lower cap.

Expect more reports and press releases from NGOs and the industry, and more tweets from MEPs (see below)

‘To put it simply, I think that productive land should be used to feed people, not to feed the rich world’s addiction to driving. As things stand, the renewable energy target for transport does nothing to protect our environment and instead incentivises the production of biofuels which contribute to food price hikes for the poorest people on earth.”

NW constituents are rightly concerned about the damaging cap on #biofuels which will affect UK industry. Today I voted against the cap #ILUC