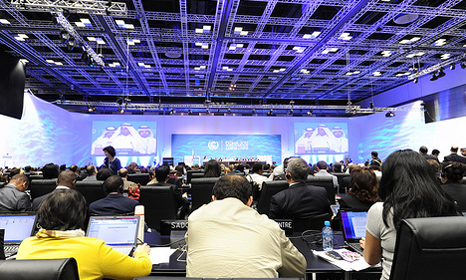 Establishing a pathway to a global emissions reduction deal in 2015 will be the priority for the Polish Presidency at this year’s UN climate talks.

The organisers also say emission reduction strategies from 2015-2020 will need to be explored.

Poland’s ambitions for the 19th Conference of the Parties (COP) to the UN climate convention can be found on a new website created for the event.

Other goals include exploring a pilot phase of new market based mechanisms for emission reduction and clarifying financial commitments from 2013-2020 and post 2020.

The organisers say they also want to end the summit with decisions on redusing emissions from forest degradation (REDD), land use and agriculture.

The Warsaw summit, which runs from November 11-22, is seen by many analysts as a critical milestone in efforts to develop a global climate change treaty.

While talks on developing a deal in 2015 appear on track, other elements of the UN process are in disarray after Russia blocked efforts to discuss implementation measures in June.

Speaking at the conclusion of the last round of talks in June, UN climate chief Christiana Figueres expressed confidence that the Warsaw summit can deliver a clear pathway towards the COP21 Paris talks in 2015.

“Till now negotiators have been looking at options. Now we are on the specifics of what will contribute to the solution,” she said.

“The SBI [implementation channel] was procedurally challenged. All parties agreed there was a problem and how it should be discussed, but ironically, couldn’t agree to get it done. Look out for some creative solutions to that problem. We’re looking into assigning more time than usual to the SBI in Warsaw.”

COP19 will start six weeks after the UN climate science body the IPCC releases its latest report into the causes and impacts of global warming.

Leaked drafts indicate it will say experts are 95% sure of the causes of rising temperatures, and also expect sea levels to rise higher than previous estimates.

The Polish hosts will also come under close scrutiny during the two week conference. Poland stands accused of slowing EU efforts to agree tighter pollution controls, and is also planning to build the largest coal power plant on the continent.

A provisional agenda for the COP19 UN climate summit can be downloaded here.