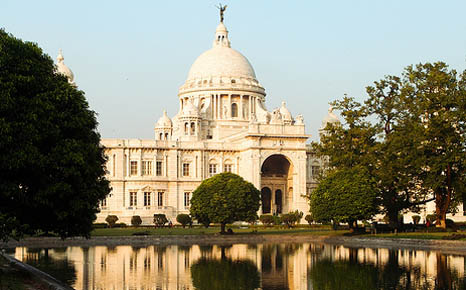 The floating solar plant will be installed at the Victoria Memorial in Kolkata. (Pic: VnGrijl)

The Indian Ministry of New and Renewable Energy (MNRE) is funding the country’s first floating solar power station at the Victoria Memorial in Kolkata, expected to be commissioned by 2014.

A raft like platform made from hollow plastic or tin drums would be fitted with solar panels which would then float on the water. The prototype would be able to generate 10kW of power and would require an area of around 100 square metres.

The ministry has already sanctioned Rs. 32 lakh for the project (approximately US$50,000), according to The Hindustan Times.

“Developing a floating solar power station would prove to be a revolutionary step as it could solve the perennial problem of land. Such pilot projects are also going on in a few countries such as France and Australia,” said Dr SP Gon Choudhury, an international expert in solar energy and the brains behind this project.

“This would [also] help conserve water for the dry seasons when power generation goes down because of lack of water.”

He added: “We have written to the Victoria Memorial authorities so that their ponds could be utilised for the project. Requests have also been sent to a few other state government agencies and departments so that the water bodies near Patuli and Science City off the EM Bypass could be utilised.”

Indian energy analyst Hari Manoharan told RTCC that floating solar could open up huge tracts of the country for power generation, but said it was too early to say if the technology could work on large lakes.

“This could be fine for regions like small ponds and reservoirs,” said Manoharan. “I don’t imagine it being feasible to construct it on other water bodies primarily because of stability concerns of the structure.

“Wind is being explored in India at the moment with MNRE setting up a special offshore wind energy unit called National Offshore Wind Energy Authority to explore the possibilities.

“The main problem with offshore installations is evacuating the power from the installation to consumption points on the shore.”

India has now pledged US$7.9 billion to create a ‘green energy corridor’ to facilitate the flow of renewable energy into its grid electricity.

The state of Gujarat revealed its own plans to conserve water and save space last week by building solar power plants over canals.