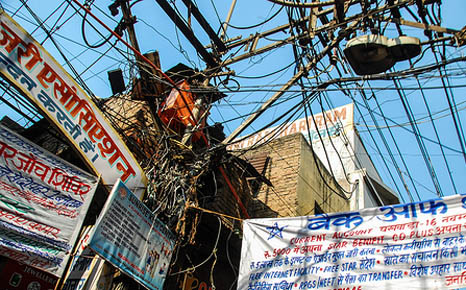 India has set aside US$7.9 billion to create a ‘green energy corridor’ to facilitate the flow of renewable energy into its grid electricity.

The corridor would be built across seven states over the next five to six years, Ratan Watal, secretary at the Ministry of New and Renewable Energy, said in New Delhi last Wednesday.

“The project will be implemented with the assistance of Germany which has promised to provide developmental and technical assistance of €1 billion as soft credit,” Watal said at the “National Consultation of Stakeholders regarding Development of Offshore Wind Energy in India”.

As part of the government’s 12th five-year plan, it aims to connect the southern grid to the national grid by 2014 to create the single largest transmission grid in the world.

Wind and solar capacity has more than doubled in the last five years, part of a wider strategy to avoid blackouts like those in July 2012, which hit 20 of the country’s 28 states, and left 700 million without power.

Without a reliable grid infrastructure capacity means little if the electricity cannot get to where it is needed, and India’s limitations are becoming increasingly clear as its renewable sector expands.

“Tamil Nadu has the highest installed capacity of wind, but due to lack of sufficient evacuation infrastructure, a significant part of the power generated during the peak wind season goes to waste,” Madhavan Nampoothiri, founder and director of Indian energy consultants RESolve told RTCC.

As of February 2013, India had 19,564MW of wind, of which Tamil Nadu accounted for 7,195MW. Solar, the second largest source of renewable energy in the country had 1,208MW of installed capacity.

Last month a joint study from Greenpeace and market analysts Bridge to India said Delhi could break the 2GW solar power barrier by 2020 due to plummeting costs, extensive roof space and the rising demand for electricity.

Electricity is the lifeblood of any economy supporting healthcare, education and businesses, but India has a history of power cuts and an unreliable grid. Heavily polluting and expensive diesel generators are currently being used to supply electricity when the grid fails.

Where the government has deemed access to the grid not feasible due to the remoteness of some rural locations, it has launched the Remote Village Electrification Programme.

According to the World Bank, 400 million people in India do not have access to electricity.

India’s fast growing mobile phone sector will also have to invest in new infrastructure.The government has ordered them to switch half of their rural towers, and a fifth of those in cities, to green energy by 2015, affecting around 150,000 masts.