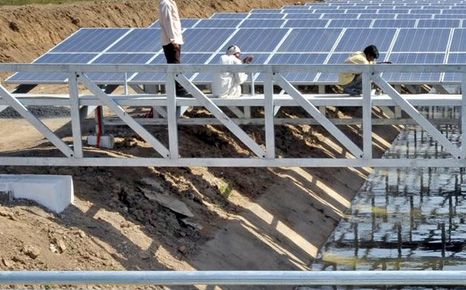 The India state of Gujarat aims to save water and boost electricity production by installing solar power plants over canals.

It plans to construct a 10MW plant over waterways in the Narmada Valley, which supply water to the arid regions of Saurashtra and Kutch.

The new project is said to cover nearly 10 kilometres of the canal and will generate around 16 million units of electricity per year, which will be fed back into the grid. Investment in the project by SSNN is reported to be US$19.5 million.

State-owned company Sardar Sarovar Narmada Nigam (SSNN) will install the panels, having already constructed a similar 1MW project on the Narmada canal in 2012.

Madhavan Nampoothri from Chennai-based RESolve Energy Consultants told RTCC the project’s minimal impact on the environment means it is likely to be copied across the country.

“No land wastage, especially when the soil is fertile. Basically, the land is available without affecting the local ecosystem and the canal top systems can prevent some of the evaporation losses in the canal by shielding it from direct sunlight.”

He added that constructing canal-top projects could be more expensive than conventional installations because of the additional steel required.

In related news, India will also be using solar power for lighting and air conditioning its trains, reducing the use of fossil fuels and the world’s largest railway system’s reliance on the grid.

The Integral Coach Factory (ICF) has launched the project in association with the Indian Institute of Technology Madras (ITT Madras) to design the carriages.

“We have asked IIT Madras to find ways to tap solar power and use it for interior lighting and air conditioning. An MoU was signed a month ago. We have started preliminary discussions with professors to work out different modalities to develop a feasible model to use solar power in running trains,” a senior ICF official told the Times of India.

Air-conditioned trains are seeing a growing demand but efficiency and reliability is a concern as they can run across different climate zones during a single trip.

Last year, passengers on a Chennai-Thiruvananthapuram train suffered when the air conditioning failed. Air-conditioned compartments often have trouble with the battery system needed to power the self-generator fixed near the wheels of the coach.