Obama and senior advisors accept need to tackle global emissions, but do they have political will? 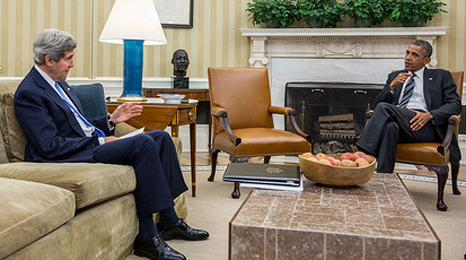 John Kerry and Barack Obama both appear to be driving greater climate ambition in the USA (Pic: White House/flickr)

I have just spent several weeks in various parts of the United States of America meeting with scientists, journalists, senior government officials and ordinary citizens.

I have also been following the daily electronic, print and social media about news coverage of climate change.

My first impression is, surprisingly for me, one of a greater sense of optimism than I have had for a long time.

This does not mean that the US has turned the corner on recognising the scale of the problem and its responsibilities towards leading a global response, but the wind is definitely beginning to blow in the right direction.

Below are a few elements to support my sense of optimism.

It is very clear that President Obama and his team of senior advisers all accept the scale of the climate change problem and recognise the US’s responsibilities.

This is in stark contrast to his predecessor President Bush who refused to take any significant action for eight years. During President Obama’s first term of office he tried to bring Congress on board towards a national response to tackling climate change, which proved to be unsuccessful.

So in his second term he has decided to take whatever action he can by executive order and without requiring Congressional approval.

While I have criticised his Climate Action Plan as being too little too late (when compared to the scale of the problem that has to be tackled), I must acknowledge that it is indeed a significant step forward compared to the past.

The second important personality that is involved is the new Secretary of State (and former Senator) John Kerry who has a long and honourable history of engagement on this issue both at national as well as international levels.

Unlike his predecessor, Hilary Clinton, he is very interested in this topic and is determined that the US plays a more positive role at the international level. He has already taken personal charge of US international relations on this topic.

The most difficult element of the political landscape in the US on the topic of climate change has always been, and continues to be, the Republican Party, who control the House of Representatives in Congress (and thus can, and do, block any attempts to bring legislation to tackle climate change).

Within the Republican Party the climate change denying tendency is led by the Tea Party wing of the party and a handful of Congressmen and Senators.

However, even here there is a growing awareness amongst more sensible Republicans that they cannot continue to deny the reality of climate change.

An example is the recent article in the New York Times, jointly authored by three former Republican heads of the US Environmental Protection Agency (USEPA), arguing for the Party to take sensible actions to tackle climate change.

The final element in changing public attitudes in the US is the reality of climatic events like Hurricane Sandy that hit the New York area a few months ago, causing over $50 billion worth of loss and damage and the even bigger losses from the severe droughts (biggest in over fifty years) in the south and mid-west of the country.

Even though people may not (yet) believe that these events are due to human induced climate change, they cannot deny the reality (and devastation) of the events themselves, and hence more and more sensible people (specially the educated young people) are willing to accept that precautionary measures to prevent damage from such events in future should be supported.

For the rest of the world the advice of the scientific community, through the periodic reports of the Intergovernmental Panel on Climate Change IPCC) over the years have proved sufficient to convince most leaders and people that human induced climate change was a reality and needed to be tackled by concerted global actions.

Only the people (and some politicians) in the US have not been convinced by the scientists. So the people and politicians in the US may need different arguments to convince them.

These will include the reality of major climatic impacts (such as droughts and hurricanes) in the US, or the threat of mass migration and conflict raised by the Pentagon, to perhaps being overtaken by China to reach the post fossil-fuel economy.

Whatever the reason for taking actions, even if they take the right decisions for the wrong reasons, I can live with that.

The writer is Director, International Centre for Climate Change and Development, Independent University, Bangladesh, Dhaka. This article first appeared on the Bangladesh newspaper The Daily Star.