Kerry: US must do more on climate change

The US response to climate change has been inadequate, Secretary of State John Kerry has admitted.

Speaking en route to the Arctic Council Ministerial meeting in Sweden, Kerry praised his host’s efforts in cutting its emissions, but said his own country;’s performance was a matter of ‘regret’.

“And I have to say that I regret that my own country – and President Obama knows this and is committed to changing it – needs to do more and we are committed to doing more.”

“So I come here aware of the challenge with humility but with great respect for what Sweden has been doing in leading on this effort,” he added. 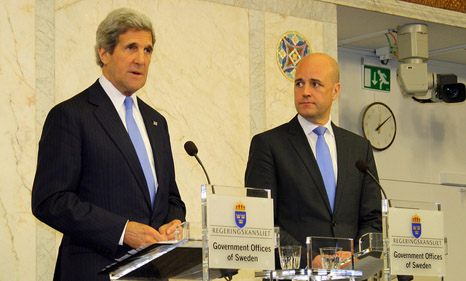 Kerry has a long history of environmental campaigning that dates back to the first Earth Day rallies of 1970.

He campaigned for action on acid rain and unsuccessfully tried to introduce national carbon trading legislation in the USA.

The country was considered to have softened its tone at the most recent UN climate talks in Bonn. Despite this, its main policy position remains unchanged.

A US proposal for the new 2015 UN climate deal to allow nations to set their own emission reduction targets was described as “laughable if it weren’t so frightening” by Meena Raman of the Third World Network NGO.

Kerry is also at the front and centre of the Keystone XL debate with the decision to approve the tar sands pipeline resting with Kerry’s department.

Kerry will join the Arctic Council Ministerial meeting in Kiruna in the north of Sweden.