Why I cannot congratulate President Obama on his climate plan

It seems that everyone who understands the threat climate change poses is lining up to congratulate President Obama on the plan he unveiled this week.

I fully appreciate the significantly different tone he has adopted, as well as the number of measures that Obama has articulated, and of course I welcome his words and proposed actions. I have no doubt that Obama is sincere and that he wants to deal with the issue (unlike his predecessor) but, from where I sit in Bangladesh, I am afraid his words are simply too little too late!

Let me give a few reasons why.

First, because the United States of America refused to join the global Kyoto Protocol and took very little real action to reduce its greenhouse gas emissions over the past 15 years, other major emitters have felt little pressure to act with ambition. Meanwhile the concentration of carbon in the atmosphere has risen to its highest level in three million years.

In other words we have moved inexorably towards a much warmer world and we are already, arguably, seeing the manifestations of this in stronger and more frequent cyclones, hurricanes, floods and droughts and heat waves across the world. So we have lost almost two decades as the United States — the world’s richest country and its biggest historical emitter of greenhouse gases — has stayed disengaged. 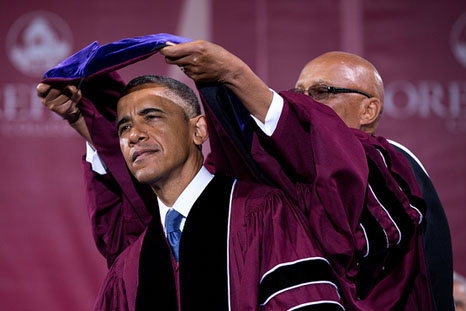 Second, the speech President Obama made this week was one he could have made in January 2009 immediately after he was elected for his first term. He wasted an entire term trying to engage with Congress and now has realised that he needs to move ahead without them. He could have done this five years ago.

Third, the United States of America has completely ignored most of the funds set up under the UN Framework Convention on Climate Change to help the poorest and most vulnerable developing countries adapt to today’s (not tomorrow’s) climate impacts.

The amounts his administration has given recently to the Least Developed Countries (LDC) Fund are trivial compared to both the scale of the problem as well as what other, much smaller developed countries, have provided. The United States has so far refused to make any contribution to the Adaptation Fund, which is one of the best managed funds. On this score alone the United States, far from showing leadership, is perhaps the first in showing “laggardship”.

While Obama’s speech is better late than never, I feel it is still too little too late. I would urge the President to be much bolder with the domestic actions to reduce emissions using the full authority of the Executive Office bypassing Congress (which he has done on other issues) while taking a true leadership role at the international level, especially by providing substantial funds into the Adaptation Fund of the UN.

My country faces the impacts of climate change right now, not in some distant future, so I cannot join those who only congratulate the President for his pronouncements and actions. I urge those who praised the President this week to now spur him to take much greater actions commensurate with both his lofty rhetoric as well as the scale of the problem.