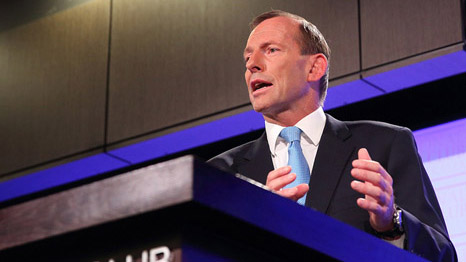 Tony Abbott is waging war on the unpopular carbon tax

Yesterday, the Australian Parliament was dissolved and election season commenced in full force.

The final vote on 7 September could determine whether Australia is up to the challenge of addressing climate change.

Although climate change is not likely to be a major vote changer at this election, the next Parliament will be vital in boosting low carbon competitiveness and improving preparations for climate impacts, says The Climate Institute.

The winning candidate will lead Australia through a vital period in both the national and global climate change calendar.

According to the Pollute-o-Meter put together by The Climate Institute, the current Labor Prime Minister Kevin Rudd, who has pledged to replace the carbon tax with an Emissions Trading Scheme, is the best hope for a strong environmental policy. He is currently polling at 37%.

Tony Abbott, the leader of the opposition and with 44% of the primary vote, has consistently indicated that addressing climate change is unlikely to be at the top of his agenda.

While the Greens are the most serious about cutting Australia’s carbon pollution, with only 9% of the vote, the odds are not favourable on them leading the next government.

Climate change has been at the forefront of the Australian news over recent months, with the highest July temperatures since records began, heated debates over the unpopular carbon tax and a recent visit from the Vice President of the sinking Marshall Islands urging Australia to strengthen its ambition on climate change policy.

The climate-related discussions that are currently heating up Australian politics will face further scrutiny on the international stage at the UN Conference on Climate Change in Paris in 2015.

“The next Government will determine whether Australia will help or hinder global solutions to climate change as we enter 2014’s ‘year of ambition’ and 2015’s deadline for a global agreement on seeking to achieve the agreed goal of avoiding two degrees warming above pre-industrial levels,” says John Connor, CEO of The Climate Institute.

“Keeping warming below this level is Australia’s national climate interest – but whether we help or hinder global progress depends on both the credibility of our policies and the quality of our climate diplomacy. Since both parties share the goal of up to a 25% reduction of Australia’s 2000 emission levels by 2020, a key test is whether their policies are capable of achieving this.

“The next Government, and indeed Parliament, will also determine whether Australia continues the historic decline in domestic emissions in key sectors and accelerates low carbon investment.”

The controversial issue of a carbon tax reared its head on the first day of election campaigning, with Abbott relauching his pledge to abolish it as a priority should he get into office.

He told reporters, “‘If this election is about anything, it is about the carbon tax. Getting rid of the carbon tax is fundamental to our plan for a stronger economy.”

He has already shown that he is “fair dinkum” on the issue by writing to the secretary of the department of prime minister and cabinet to inform them that the first legislative priority of his party would be to scrap the tax.

However, his campaigning visit to a meat packing factory, which he claimed was struggling under the high impost of the tax, ended less than successfully when it was pointed out to him that the carbon tax facing the company under a Labour government would in reality be only a tenth of the $5 million that he was predicting.

Rudd remained quiet on the subject of a carbon tax today, but anticipated Abbott’s moves back in July by bringing forward the start date of the lower floating carbon price from 2015 to 2014.

Connor says, however, that research by The Climate Institute isn’t the decisive issue that Abbott claims it is.

He says, “Our research shows this election is no referendum on the carbon tax.