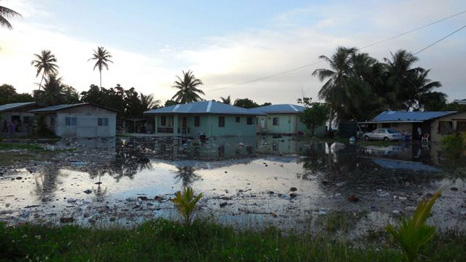 Sea levels are rising and the capital city is flooding, but evacuation is not an option being considered for the Marshall Islands, says Tony de Brum.

And despite dire projections surrounding sea level rise and falling rainfall levels, he said that, for now, the residents of the tiny  Pacific Ocean islands are staying put.

He told RTCC, “I don’t see emigration as an option being considered right now. We are hopeful that with some of our efforts, if the world will pick up on some of the initiatives we’re suggesting, we won’t need to displace our population at all.”

The islands are formed of 34 coral atolls which are no more than 2 metres above sea level. Their particular vulnerability to extreme weather events has been witnessed over the past couple of months, with high tides swamping the capital of Majuro in June, while islands in the north have been hit by severe drought since the start of the year.

De Brum hopes that his recent tour will have helped to raise the ambition of the Australians over what they can do for the struggling Marshall Islands.

He told RTCC that the trip has left him with a sense of hope that help will be forthcoming, regardless of the political leadership of the country, which has one of the highest carbon emissions per capita in the world.

“I have been very, very happy with the response that we got from the Australians. We met with the government, we met with the opposition, and we’ve come away with the sense that Australia will take it very seriously and that it will speak with a loud voice on behalf of our country,” he said.

“It doesn’t matter which party leads the government of Australia, we will always consider them to be partners and brothers to the pacific islands.”

Bipartisan support would be a huge boost for the Marshall Islands, especially considering the current doubt hovering over Australia’s commitment to carbon reduction; Kevin Rudd’s recent scrapping of the carbon tax was heavily criticised by Greens, while opposition leader Tony Abbot is notorious for his climate scepticism.

Climate change initiatives will be discussed at length in early September at the Pacific Islands Forum Leaders’ meeting, which will be attended by representatives from China, the EU, India, Japan and Canada. De Brum said that he hopes this meeting will be “special”, with a tight focus on climate change, and putting the problems the Marshalls are facing onto the global agenda.

The attendance of John Kerry, Secretary of State for the US, would help to push the issue onto the international stage. De Brum says he is confident that he will attend, although security considerations have so far prevented him from confirming.

“We think also that America has shown its commitment to the environment and climate change leadership as well, and if Kerry turned up that would send a message not just to the Pacific but throughout the world as to global concerns about climate change.

“We think that the United States recognises this and Mr Kerry will in fact participate in the meeting.”

De Brum hopes that the Forum will end with a Majuro Declaration which can be presented to the United Nations General Assembly as part of the global efforts to reduce greenhouse gas emissions, and prevent the residents of the Marshall Islands from having to evacuate their homes.

He said, “We want the declaration to be focused on reducing the human carbon footprint and getting the members of the Forum to sign onto an outcome document that is hopeful and aspirational.”

While De Brum remains hopeful that the progress made at this forum will prevent catastrophic climate change, he remains aware of the problems that would have to be faced if rising sea levels were to force the Marshall Islands underwater.

While it was Australia, the Marshall Islands “brother in the south”, where De Brum recently conducted his tour, he emphasised that, if residents had to leave, America would be the natural place for them to go to, due to the post-war agreement between the two countries.

“People who come to the Marshalls and become citizens can take advantage of that too, and that’s maybe something that would attract a lot of our neighbours to come along our way in anticipation of being unable to reside in their own land due to climate change.”

Majuro, he says, has already seen a rise in immigrants coming in from neighbouring islands, placing added pressure on the city’s resources.